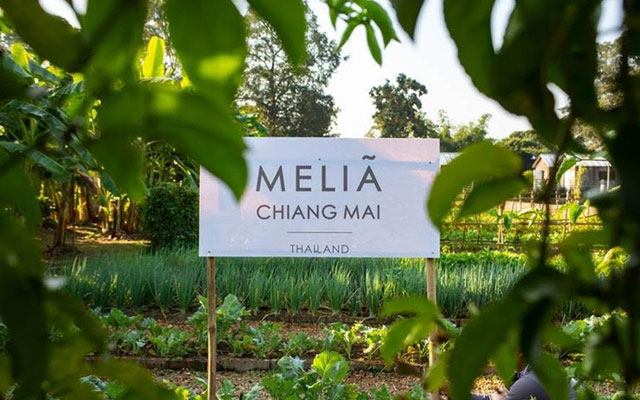 Meliá Chiang Mai, a 260-key hotel to soon debut in Thailand’s mountainous north, has embraced the farm-to-table social movement by establishing a farm to harvest produce for its restaurants, bars and spa.

The hotel, due to open on April 8 on Charoen Prathet Road in the heart of Chiang Mai, has partnered with ORI9IN The Gourmet Farm, a 80ha gourmet organic farm located in nearby San Sai District overseen by chef-turned-sustainable farmer James Noble and his wife May.

Noble, a Briton who has run Michelin-starred restaurants in the UK, will work with local farmers to grow an array of fruits, vegetables and herbs for the hotel on its own 0.8ha farm on the broader ORI9IN property.

In addition to local seasonal produce, the farm will also grow various kinds of tomatoes, salad leaves, and specialised ingredients that would otherwise need to be imported from Spain for the hotel’s authentic Mediterranean cuisine.

The partnership is a central plank of Meliá Chiang Mai’s 360° Cuisine programme, under which the hotel aims to work closely with local farmers to help them improve sustainability and encourage ethical production to make communities and the overall food system more resilient.

The 360° Cuisine programme not only gives guests peace of mind about where their food comes from but encourages them to visit the hotel’s farm to meet local farmers and learn more about sustainable farming and healthier eating.

“In addition to pursuing ‘farm to plate’ by sourcing organic produce that travels only a short distance to our hotel, our partnership with ORI9IN also comprises ‘plate to farm’ where we separate our food waste and bring it back to the farm as compost, thus minimising waste as part of a truly 360-degree concept,” said Meliá Chiang Mai’s general manager Edward E. Snoeks.

The hotel will offer guests day trips to the farm that include a picnic lunch and a chance to learn more “about the journey their food and these products have made, as well as who has been a part of that journey”, said Noble.

“People often don’t know where food comes from, so we show them, albeit underscored by our passion for locally grown, sustainable ingredients,” he added. “This is also tourism that leaves no footprint on the land; we’re trying to show people that you can have a day out without harming what you came to see in the first place.”