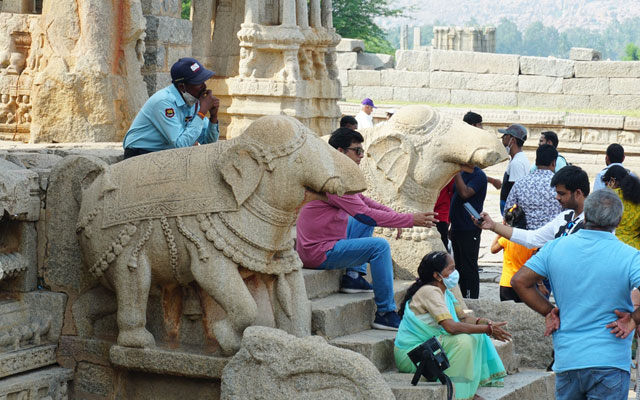 A worrying rise in Omicron cases and the subsequent restrictions imposed by the central and state governments have dealt a fresh blow to Indian tourism, aviation and hospitality sectors, with a nosedive in demand due to travellers either cancelling or postponing their trips.

All international travellers have to undergo mandatory quarantine for seven days and a Covid test on the eighth day since Tuesday (January 11). Earlier, the state of West Bengal moved to restrict domestic flights from New Delhi and Mumbai, allowing airlines to operate flights only three days a week.

“From January onwards, we are seeing cancellations from tourists. For the months of February to April, we had some queries which we expected to materialise in demand. But now, the clients have postponed their plans for an indefinite period,” said Sanjay Thakur, founder, East India Travel.

With the emergence of the new Covid variant and the recent trend of rising infections, a few states have already announced certain curbs on domestic air travel, posing a serious threat to domestic passenger traffic recovery in the near-term, credit rating agency ICRA Limited said in a statement.

One of India’s leading airlines, IndiGo, has said that owing to reduced demand, the carrier will be selectively withdrawing some of its flights from service. The airline anticipates that around 20 per cent of its current scheduled operations will be withdrawn from service.

“Owing to the increasing number of Omicron infections, large numbers of IndiGo customers are changing their travel plans. In response to customer needs, IndiGo is waiving change fees and is offering free changes for all new and existing bookings made up to January 31, for flights up to March 31, 2022,” the airline’s recent media communique read.

A large section of hoteliers are seeing cancellations in bookings and a drop in enquiries too.

Shubhadeep Dutta, general manager, Goldfinch Mumbai, said that the recovery process of the industry have once again taken a big hit with the fresh restrictions imposed by the state and central governments.

“Many tourists are cancelling or postponing their trips. The demand from the wedding segment has also taken a toll. Also, the queries for future bookings have gone down,” he added.

“December was the busiest period for all the hotels and so, for us, (business) was largely unaffected and we were quite content with the sales and performance of our properties located in Manali, Shirdi, Gandhidham, Tirupati, Jaipur and Bandhavgarh.

“So far, cancellations have mostly been for our properties in Kolkata and Bangalore because of state-imposed restrictions and flight cancellations. Occupancy at our hotels in Manali and Bandavgarh have been going strong.”

He expects a slowdown in the coming weeks in view of rising Omicron cases, and adds that revenues from weddings will be impacted with numbers being restricted under the new guidelines.

Some hoteliers are hoping that a complete lockdown doesn’t happen as it would further aggravate challenges faced by the hospitality sector.

“After a sturdy third quarter, we are assuming that the last quarter will definitely witness a fall in revenues. As a sector, we are hoping that complete lockdowns will not be imposed, otherwise, it will take a comparatively longer time to recover,” said Rahul Deb Banerjee, vice-president, The Clarks Hotels and Resorts.

“The Indian hospitality industry anticipated the opening up of international routes, but in the current situation, it will not open soon. However, this time, the good thing is that cancellations are not high as people are postponing their trips for future.”