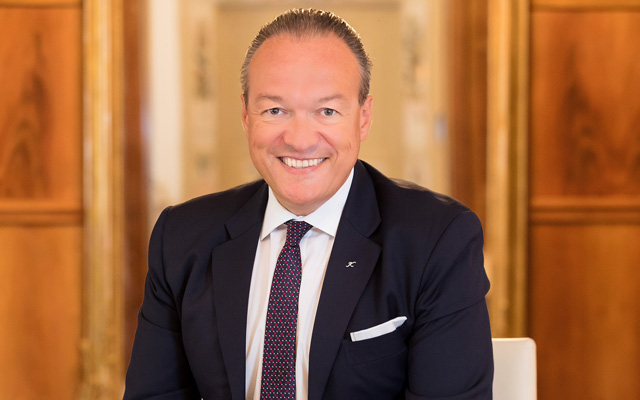 Putting behind him a tough 2021, Kempinski group CEO Bernold Schroeder said the company is ready for an industry that has been reshaped by the pandemic.

The big changes are in human capital and owner-operator relationships, he said, in an interview in Singapore at the The Capitol Kempinski Hotel Singapore. But tackled right, these issues could also be the biggest opportunities.

For Schroeder, human capital is the bigger priority than expansion currently.

“The biggest problem we are facing in the industry or as a company, apart from the ups and downs of Covid and the Omicron uncertainty, is human capital, at least in Europe, which is 60 per cent of our group’s contribution.

“The industry lost so many good people through the European short-time work schemes, as employees – especially in the lower salary brackets – earned less at the end of the month and left. They joined retail, call centres, warehouses and other sectors that boomed during the pandemic. As it is, the hotel industry has always struggled to get good people,” said Schroeder.

He is more optimistic about Asia’s labour shortage, arguing the industry has a better reputation in Asia than in the West, where it is seen as “low pay, unionised, work during weekends”.

“The hotel industry has raised entire villages and families in Asia to middle-class level and given global careers to people. This is what’s great about it. To work for an investment bank or a law firm, I’d probably have to be from the right university. But in the hotel industry, I can come from a small province in Thailand, move to Bangkok, then to the Middle East and keep growing my career. People realise this and they will come back,” he opined.

Luxury hotels are worst-hit by the labour shortage, as they are more labour-intensive and less able to outsource functions such as housekeeping or F&B than mid-scale hotels. Like the rest of the industry, Kempinski has enlarged job scopes and clustered functions, such as centralising reservations.

“A lot of the team members are going the extra mile,” said Schroeder. “The workforce has grown closer together this year; there’s a strong team spirit.”

Kempinski is ahead of chains Marriott, Hyatt, Radisson, Accor, Best Western, IHG, Hard Rock, MGM, Six Flags, Four Seasons, Las Vegas Sands and Minor in Forbes World’s Best Employers 2021. Its score on employee satisfaction and engagement, done by Gallup in October, is also the highest in the company’s history, according to Schroeder.

Another crisis this year involved a defamation campaign against Kempinski and senior officials that started in January, shortly after Kempinski changed management, and criminal complaints were filed against several senior Kempinski representatives. All complaints were found to be entirely baseless by the authorities.

Lessons from Asia
Schroeder believes that lessons learnt from a string of Asian crises helped him get through a gruelling 2021. Before joining Kempinski, he spent much of his career in Asia with Banyan Tree Holdings, Jin Jiang International and Pan Pacific Hotel Group.

“I’ve gone through the Asian tsunami, SARS, Asian financial crisis, bird flu, swine flu and so on. Asia is good in managing crises. In a crisis, you have to be clear and honest in communications. Share bad news with the family. Think clearly of the problem, solution and implementation. KP (Ho Kwon Ping, chairman, Banyan Tree Holdings) is really good with this. In the West, you talk, but nothing gets implemented.

“Show progress as you go along, to give people hope. As they say in Asia, you can’t break five or six chopsticks, but you can break one or two. I try to bring into the company these simple values.”

Another lesson from Asia is keeping the team intact. “In the Far East, whenever there is a crisis, everyone chips in. We did something similar with voluntary paycuts and, as a result, only less than 10 per cent of the corporate office workforce globally was laid off,” he shared, adding that the company now has 150 corporate staff.

The chain has 79 hotels in operation. The newest, Kempinski Palace Engelberg, Switzerland, opened in June. The next opening will be The David Kempinski Tel Aviv, Israel, in February 2022.

The big litmus test
The pandemic is a big litmus test of owner-operator relationships. According to Schroeder, there are more conversion opportunities for smaller, bespoke luxury chains such as Kempinski, as some owners are no longer happy to be with big groups that have too many hotels under different flags in the same destination.

“I spend enormous time with owners. I speak every single day with them to see how we can help. We are 80 hotels with around 55 owners – it’s difficult to do that if you have 5,000 hotels and thousands of owners,” he said.

“Secondly, the hotel business has changed. If today you as a hotel general manager don’t understand that it’s a real estate business and an operating business, which are two different components, then it’s difficult to be a successful general manager. You have to be able to think from both sides of the table, especially in this crisis. We spend a lot of time training our general managers on asset management,” he added.

Overall, the group continues to invest five per cent of payroll on training.

Kempinski, he said, is like a small private bank. “People come to us to invest their money. We must offer different solutions tailored to their needs, but the financial returns must be better than the bank next door,” said Schroeder.

He is looking to add 30 to 40 hotels in the next five years and believes Asia is still where future growth is, despite the pandemic wiping out international travel in the region. Other growth regions are Africa and the Middle East.

One reason is the wealth in Asia, which propels the domestic travel market as the pandemic has shown. China, Bali and Dubai were among markets that did well for Kempinski in the crisis. “We had so many Indian families who based themselves in our residences in Dubai for several months, at average rates of more than 1,000 euros (US$1,136) per night. In Bali, the domestic travellers stayed longer – there is so much wealth in Indonesia,” he elaborated.

But like all chains, Kempinski had some losses this year. On October 13, Kempinski Hotel Nay Pyi Taw, in Myanmar’s capital city, was closed for good after seven years of operation. Kempinski wasn’t alone; Myanmar’s political instability also saw Banyan Tree Holdings pause its joint venture with Myanmar’s Htoo Group, signed just before Covid in March 2020, to jointly develop luxury hotels in the country. Banyan Tree is monitoring and evaluating the future of the partnership.

On the other hand, Kempinski gained the management of a one-of-a-kind hotel in Dubai. The 156-room Kempinski Floating Palace has 12 villas that can sail to other anchorages at times, according to a press release. Built by Seagate Shipyard, a pioneer in floating facilities in the region, the hotel is slated to open in 2023.

Buoyant is how Schroeder feels about Kempinski’s future even though the pandemic isn’t quite over.