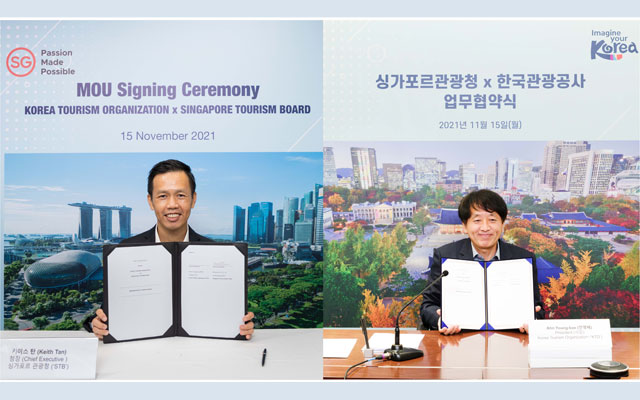 The Singapore Tourism Board (STB) and the Korea Tourism Organization (KTO) have signed a two-year MoU to co-promote both destinations, develop tech solutions to benefit the two countries’ respective industries, and boost bilateral tourism.

Under the partnership, KTO and STB will jointly drive destination and product awareness through marketing and promotional activities to capture pent-up tourism demand as international travel gradually resumes.

This includes a new cartoon series, featuring the character Hojong from KTO’s set of mascots Kingdom Friends and STB’s Merli, which will be officially launched following a successful pilot social media event in April this year. The video campaign will see both characters coming together to introduce attractions from their respective countries.

Both organisations will also support tourism start-ups to develop technologies that will benefit the tourism sector. For example, STB will support Korean start-ups through the Singapore Tourism Accelerator programme to develop quality solutions and pilot them within Singapore’s tourism industry.

Ahn Young Bae, president, KTO, said: “I am optimistic that this MoU will play a key role in reviving tourism between both countries, and we are excited to welcome more Singapore travellers to South Korea.”

Keith Tan, CEO, STB, added: “South Korea is a key source market for Singapore, and as international travel gradually resumes, we look forward to welcoming South Korean visitors back. We are confident that this partnership with KTO will drive awareness of Singapore’s new and reimagined offerings, expand the capabilities of our industry, and support the overall recovery of our tourism sector.”

The partnership reflects STB’s continued efforts to raise the attractiveness of Singapore to South Korean travellers. Last year, STB and Studio Dragon Corporation signed a three-year partnership to promote Singapore as a destination in South Korea through the production of Korean dramas in Singapore.