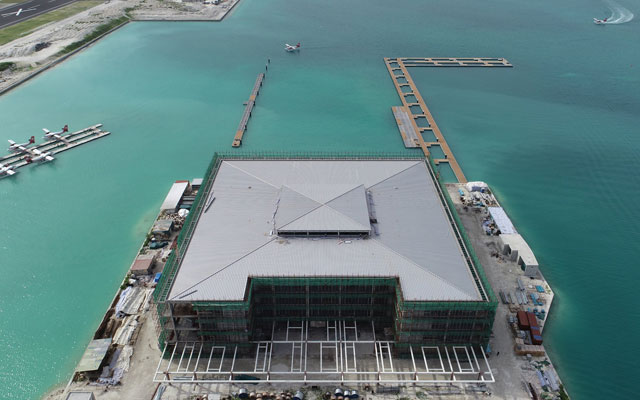 A new seaplane terminal at the Maldives’ Velana International Airport is scheduled to open next year, followed by a second runway, officials said.

State-owned Maldives Airports Company general manager Hassan Areef said while there may have been delays, work is progressing in these two major developments at the country’s main international airport.

The Maldives, with a fleet of over 55 planes, has one of the largest seaplane operations in the world as the over 200 resorts in the archipelago are all accessible only by sea or air. “We are hoping to open the new seaplane terminal next year followed by the new runway,” said Areef.

The tourism industry has expressed concerns over delays at the airport due to overcapacity and long waiting times for incoming aircraft.

According to Ahmed Karam, a guesthouse owner and former president of the Guesthouse Association of the Maldives, the delay in opening the second runway at the airport is affecting the growth of tourism.

“The capacity at the airport has increased over the years and more airlines are flying in. Planes have to circle the airport for 20-30 minutes before landing due to the traffic,” he said.

However, Areef said while seasonal traffic has increased – with Maldives expecting a solid winter season of arrivals – these delays are nothing new and seen in most international airports including Heathrow in the UK.

“Once when I was travelling to Turkey, we had to circle several times over Istanbul airport. This is a common occurrence in many airports,” he told TTG Asia.

He also pointed out that the airport delays are due to European carriers arriving at the same time and not according to arrival slots allocated. “Some of them arrive earlier than the scheduled times which then creates some delays,” he said.

Abdulla Ghiyas, former president of the Maldives Association of Travel Agents and Tour Operators, said there has been an increase in scheduled flights operated by airlines like Emirates, Flydubai, Qatar Airways, Etihad and British Airways. “There are also several charter flights operating,” he added.

The airport caters to some 35 international airlines connecting the Maldives to over 40 destinations. Passenger capacity has been increasing, with the airport currently catering to three million people annually. A new terminal being built, which is scheduled to be ready by 2023, will cater to 7.5 million passengers.

Meanwhile, a new apron, part of the airport redevelopment project covering an area of 35,000m2, was opened this month. It can accommodate a maximum of nine aircraft.

The Maldives is targeting 1.3 million tourists this year, with operators saying this figure would be easily achieved due to steady arrivals and a positive winter season in spite of the pandemic.