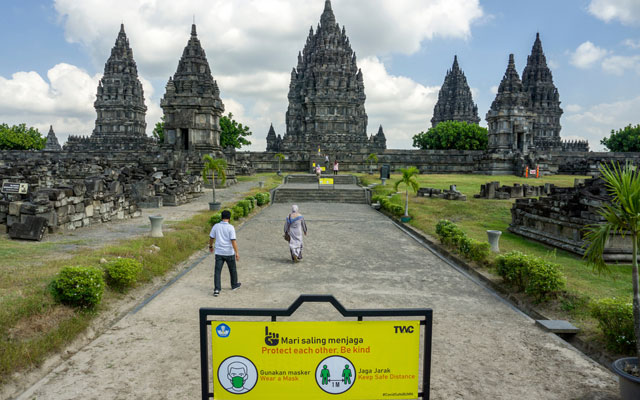 The Indonesian Inbound Operators Association (IINTOA) has sent a letter to president Joko Widodo seeking financial relief for its members, after repeated cries for support to help alleviate some of the stress caused by Covid-19 went unheard.

In the letter sent last weekend, cc’d to the minister of finance and minister of tourism and creative economy, IINTOA chairman Paul Edmundus Talo and secretary general Ricky Setiawanto pleaded for grants and soft loans to enable their members to restart their businesses after the pandemic.

In a dialogue with the media last week, Paul said the pandemic had forced the majority of tour operators in the country to cease operations, with many forced to switch industries or change careers in order to survive.

Kuswadi Rawit who runs tour agency Batu International Wisata in Malang, East Java, for example, had to let go of all his staff due to the economic impact of Covid-19 and he now uses his office space to pack staple food packages for sale. Elsewhere, in North Sulawesi, Jouvendi Rompis, owner of Adventurindo Tours, has pivoted to become a chicken farmer.

Many have sold their business assets and shed workers. Horas Tours, for instance, has lost 77 per cent of its staff, according to executive director Indra Fadjar. That loss in trained and experienced talent means inbound players like him would face difficulty restarting their businesses in the wake of the pandemic, he said.

Meanwhile, Freddy Rompas, inbound general manager of Pacto, opined that it will be a challenge for inbound operators to approach foreign business partners again post-pandemic without the government’s assistance because it is costly.

IINTOA’s Paul said the association had approached banks for soft loans, but was rejected. As such, the association formed a task force to approach and lobby officials from the Ministry of Tourism and Creative Economy and State-Owned Banks Association for financial aid, he added.

During their meetings, the government had agreed to help inbound tour operators, but failed to follow through with that promise, revealed Jongki Adiyasa, deputy chairman of IINTOA.

Tour operators, for example, were left out in the grant scheme given to the tourism and creative economic industry, according to Jongky. As well, the government’s promise to fund a programme rewarding health workers with tour packages offered by association members did not materialise.

In a last-ditch attempt to have their voice heard, IINTOA has sent the aforementioned appeal letter directly to the president.