Once a thriving hub attracting millions annually eager to explore Angkor Wat, Siem Reap has been devastated by Covid-19. Marissa Carruthers looks at what the future holds for Cambodia’s tourism capital. 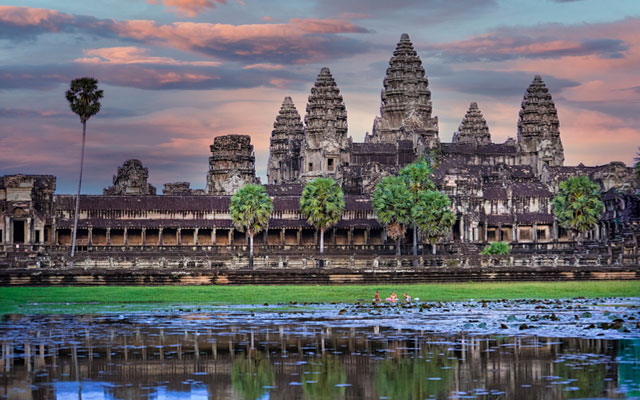 It’s been almost 18 months since Cambodia closed its doors on international tourists, leaving its dominant tourism economy in tatters. Nowhere in the nation has felt it harder than Siem Reap, a city whose economy is heavily reliant on tourism.

While international arrivals to the town had already started to slow pre-pandemic, in 2019, Siem Reap welcomed 2.2 million international visitors to explore Angkor Wat alone. In April 2020, Cambodia closed to tourists in a bid to control the spread of Covid. Last year, it recorded zero deaths and less than 400 cases, mostly imported and caught at the border.

This threw one small lifeline in the form of domestic tourism. While volumes were far from enough to keep the tourist-centric town afloat, locals and expats flocked to Siem Reap on weekends and public holidays to experience the temples without tourists.

According to David-Jaya Piot, president of the Cambodia Hotel Association in Siem Reap, only 10 per cent of 2019’s hotel rooms are available today, with rates hitting an all-time low. He said: “In the hotel business, this is quite difficult to come back from, especially after a crisis like this… Bankruptcies have harmed product diversity and there has been a drain in human capital as jobs have become scarce.”

In addition, the US$149 million 38 Roads project, which has seen all of the centre’s major roads torn up, has hammered another nail in the town’s coffin as surviving businesses struggle to stay afloat amid further uncertainty over when tourists will return.

Adam Rodwell, co-founder of Little Red Fox Espresso café, said: “The pandemic has changed the face of tourism in Siem Reap forever. With such a sudden and prolonged cut of income, we’ve lost so many incredible businesses. With that, we’ve also lost many incredibly skilled people. The long-term effects of that absence of skill can’t be understated.”

Hospitality staff returning to families to farm is common. Elsewhere, tour guides are delivering food and a hotel operations manager is working at a concrete factory. Nick Ray, product director at Hanuman Travel, noted: “Rescaling and rebuilding staff will be a major challenge. They’ve been in hibernation from tourism for 18 months now.”

Many hospitality businesses that have not closed have relocated to the capital in a bid to survive. Award-winning Wat Damnak shuttered its Siem Reap operations in April and relocated to Phnom Penh after reducing operations from five- to two-days a week proved economically unviable.

Co-owner and director, Nguon Vengchhay, said: “With the domestic market, two days a week wasn’t healthy for us in the long run. The plans to improve infrastructure also made it hard to keep open. At one point, we couldn’t access the restaurant for days.”

An opportunity to build back better
In spite of the unprecedented challenges the town faces along with other heavily tourism-reliant destinations worldwide, hopes remain high that Siem Reap has the strength to bounce back – how that will look, no one knows.

The 38 Roads project is slated to finish by December, and industry players hope borders will reopen by then. David Stirling, Little Red Fox Espresso co-owner, said the works are essential and being carried out when the city is void of visitors.

He added: “Siem Reap’s population growth before Covid-19 was absolutely insane. As a bustling tourist destination where the population could double or triple during peak holiday periods, it struggled with infrastructure pressure. This slowdown has given the time and opportunity to update infrastructure, which is long overdue.”

Ray also believes there is an opportunity to be had. Pre-pandemic, Siem Reap was suffering from an oversaturation in accommodation, a 15 per cent visitor downturn and strong seasonality. During peak months, hotels were regularly fully-booked while the rest of the year was a struggle.

He remarked: “We need to look at how to spread the load and transform Siem Reap into a year-round destination. It’s either that or become a destination that closes for six months of the year, like many across the globe.”

Rodwell added it will be tourists who dictate how Siem Reap emerges. He said: “It all depends on what kind of tourists come first and in what numbers. Will it be planeloads of tourists shuffled around on buses or a gentle flow reminiscent of Siem Reap at the turn of the century? The demands of the first few waves will essentially dictate which of us businesses survive.”

Piot added Siem Reap’s successful reopening will be dependent on consumer confidence and a fast vaccination rollout. On July 1, Cambodia remained the second most vaccinated South-east Asian country with 25.5 per cent of the population having received at least one dose. He added: “It’s certain demand exists. It’s all about how people can feel comfortable coming to Cambodia and returning home.”

Chhay, meanwhile, has not given up hope on reopening Wat Damnak’s Siem Reap operations. “We 100 per cent plan to reopen, when the time is right,” she said.