On the heels of the successful “Macao Week” in Beijing and Hangzhou, a series of physical events are lined up to promote the destination in China – where residents currently enjoy a largely quarantine-free travel bubble with the territory 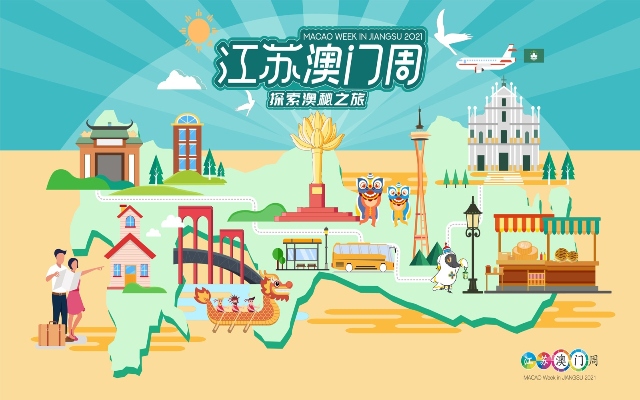 An array of colorful “tourism +” dimensions

Held at the capital of Jiangsu – Nanjing – “Macao Week in Jiangsu” is the latest destination promotion activity which the Macao SAR Government put together in expanding visitor source markets to spur its economic and tourism revival.

For four days from May 14 to 17, the mega roadshow lining Nanjing Pedestrian Street presented Macao’s diverse tourism experiences and commercial opportunities to locals and visitors through its UNESCO-accredited attractions; the city’s cultural and creative industries; sporting events; MinM – Made in Macao (an intitiative supporting local products) and products from Portuguese-speaking countries; and a joint presentation by Macao’s tourism enterprises and an airline; in positioning the city as a healthy, safe and quality destination for all.

A number of “tourism+” initiatives launched in 2021 were also brought to the fore, such as “tourism + MICE”; “tourism + culture and creativity”; “tourism + e-commerce”; and “tourism + sports” to enhance the competitiveness of Macao’s tourism industry, and facilitate the connection between tourism, MICE and other emerging industries.

Besides glimpses of Macao’s cultural symphony and unique charm via a thoughtfully-arranged programme showcase and a meet-and-greet session with beloved tourism mascot MAK MAK at the tourist information booth; a Macanese food promotion event was also concocted jointly by MGTO, Jinling Hotel Nanjing and Macau Cuisine Association in celebrating Macao’s culinary legacy and allure as a UNESCO Creative City of Gastronomy.

As well, the event featured a Macao tourism and MICE presentation seminar jointly organised by MGTO and Investment Promotion Institute to facilitate networking and business opportunities amongst the travel trade between the two cities through updates on the territory’s tourism and MICE industry trends.

Special travel offers amounting to over RMB$90 million (US$14 million) on air tickets; hotel accommodation; dining and more; went on sale at the roadshow and their supporting social media platforms.

To generate hype for the event, an extensive promotional campaign was also launched through various online and offline platforms, leveraging the wide influence of varying key opinion leaders (KOLs) specialising in travel, photography, gastronomy, fashion, and other fields from the Mainland.

In total, 16 KOLs came together in conducting an assortment of live streams, short videos, and articles about the event highlights on platforms such as Yizhibo; Weibo; and Trip.com.

As of May 17, the live streams have engaged over 72 million counts of live views and playback, with the hashtag “#Macao Week in Jiangsu” attaining 28 million pageviews on Weibo.

Arrivals have continued to dial up since the Macao SAR Government launched a spending-stimulus scheme aimed at inbound tourists from the mainland.

During the recent Labour Day holidays (May 1 to May 5), Macao welcomed a total of 167,000 visitors, with a new record high of 45,000 visitor arrivals registered on May 1.

This indicated a significant surge to figures reported for the Spring Festival Golden Week and April 2021, at 158.2 per cent and 25.4 per cent, respectively.

With hotel occupancies, a report by the Statistics and Census Service (DSEC) showed the first quarter of 2021 saw the average hotel occupancy rate at 44.9 per cent, up by 3.6 percentage points year-on-year, with the average length of stay going up by 0.1 night to 1.7 nights.

At press time, the number of guests checked into hotels and guesthouses increased by 160.2 per cent year-on-year, with Mainland guests’ numbers soaring at 216.5 per cent.

More Macao Week events are in the pipeline for key provinces and cities such as Shanghai, Chongqing, Xiamen, Taiyuan, Tianjin and Chengdu.