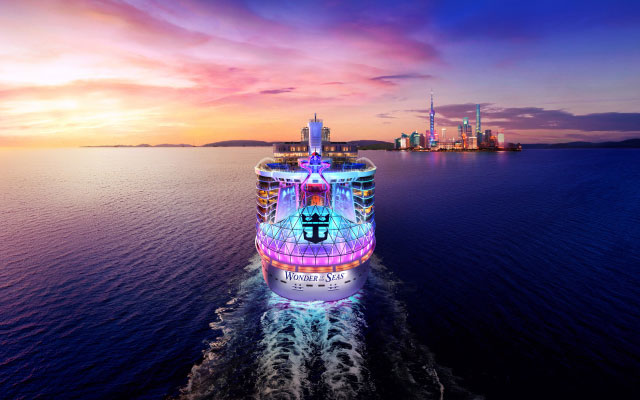 Royal Caribbean’s new and fifth Oasis Class ship, Wonder of the Seas, is set to make its debut in March 2022, sailing from Shanghai and Hong Kong on four- to nine-day voyages through the Far East to Japan.

Currently under construction in Saint-Nazaire, France, Wonder will be the world’s largest cruise ship and the first-of-its-kind to call China home when it arrives in March 2022.

The ship’s inaugural season cruises are now open for bookings. From March through November, guests can sail roundtrip from Shanghai to Japan. The combination of ports of call to choose from include Tokyo, Mount Fuji, Kumamoto, Kagoshima, Ishigaki and Miyazaki.

Wonder will homeport in Hong Kong, from November 2022 through January 2023, to offer Christmas and New Year’s holiday sailings to several ports of call. Part of the destination line-up are Chan May, Vietnam; Busan and Jeju, South Korea; Kochi and Okinawa, Japan; and Taipei, China.

Wonder will feature the first living park at sea, home to more than 20,000 plants; specialty restaurants; high-end boutiques; twin rock-climbing walls; a classic carousel and deck-defying AquaTheater shows. There will also be a pool and sports zone which will include the tallest slide at sea, a 25m zip line, basketball and volleyball courts, a miniature golf course; as well as a youth zone which will include a nursery for infants and toddlers.

The spa and fitness centre will offer a lineup of exercise classes within the gym and indulgent spa treatments. It will also be home to a café, which will serve up a menu of light and tasty fare like smoothies and sandwiches.