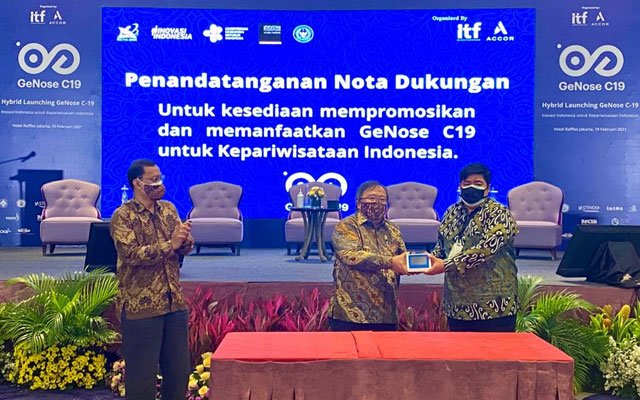 The rapid test can analyse breath samples using artificial technology and detect the Covid-19 infection within two minutes. GeNose C19 was invented by science researchers at the Gadjah Mada University in Yogyakarta, who began the research in 2008 with the initial aim of developing a tool that can detect tuberculosis.

The tool was first launched and deployed at major railway stations in Jakarta on February 2, and the Ministry of Transportation has announced that Covid-19 screening for airline passengers using the device will be available by April.

Speaking at the launch of the tool for the travel-related industries in Jakarta last week, Bambang Brodjonegoro, minister of research and technology/head of National Research and Innovation Agency, said that GeNose C19 has an accuracy of between 93 and 95 per cent, and is a more comfortable and less invasive way of testing for Covid-19 compared to throat and nasal swabs.

Additionally, the tool is portable so it can be used at any public spaces. Costs for doing the GeNose C19 test is also relatively affordable at between 15,000 rupiah (US$1.07) and 20,000 rupiah per test. In comparison, an antigen and a PCR test – a current requirement to travel – costs 250,000 rupiah and one million rupiah, respectively.

“This device is not only suitable for tourist attractions, but also places where people meet like offices, markets and factories,” Bambang said.

At the launch event, a host of travel-related associations from airlines to retail signed a letter of support committing to the usage and promotion of the GeNose C19 in their respective sectors.

On the occasion, Accor Asia Pacific (AAPC) Indonesia also signed an MOU with the Ministry of Research and Technology not only for the use of GeNose 19, but also the promotion of research and innovation products, to support the national economic recovery.

AAPC Indonesia has ordered 100 pieces of GeNose 19, and Adi Satria, senior vice president operations and government relations, Accor Indonesia and Malaysia, said the tool would be made available at Accor hotels in Indonesia, to benefit both guests and the hotel staff alike.

As regular testing for all its employees are part of the new norm, Adi said that using GeNose C19, a more cost-effective mode of testing for Covid-19, will help the company “save operational costs”.

Angela Tanoesoedibjo, vice minister of Tourism and Creative Economy, said that her office will make its best efforts to implement GeNose 19 screening on a large-scale basis in tourist destinations and attractions, to support the safe resumption of tourism activities.

Meanwhile, Salman Anwar, chairman of the Jakarta Tourism Forum, expects that the Ministry of Tourism and Creative Economy will set aside a budget to help industry stakeholders invest in the device. He also hopes that the regional and city governments will ease regulations for venues which implement such screenings to organise events.