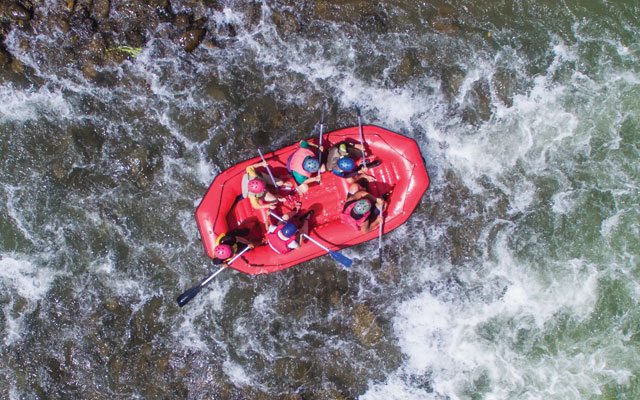 A decade ago, adventure tourism used to be associated with Europeans on holiday seeking an adrenaline high through adventurous pursuits such as bungee jumping, rock climbing or a hiking expedition.

This trend is changing. Over the last couple of years, the travel trade in Asia has seen increasing demand from Asians looking for soft adventure activities as well as authentic experiences in destinations off the beaten track.

Natasha Martin, a freelance consultant on adventure travel based in Cambodia, reckoned that the trend is motivated by an increasingly mature Asian traveller market. Unsatisfied with the typical shopping and sightseeing, the market is eyeing more meaningful experiences.

That is where adventure travel comes in. Travellers are given the opportunity to explore new places and learn about new cultures – two elements which make for “a memorable holiday”, noted Martin.

Where nature meets culture
It is that emphasis on not just nature and adventure, but education and culture that sets Asian adventure travellers apart.

Irshad Mobarak, founder of JungleWalla Tours – a tour operator specialising in taking groups to eco-tourism destinations in Langkawi – has seen that with his company.

He noted a rise in the number of participants from Singapore, South Korea, Japan and the domestic Malaysian market over the last five years. “Most (of them are) FIT nuclear and multigenerational families, who appreciate an educational element in the programme,” he shared.

Unlike European travellers, the Asian market prefers soft adventures. “They seek activities such as birdwatching, wildlife spotting and kayaking, as well as the opportunity to, say, trek to a waterfall and enjoy a home-cooked meal at a local’s residence on the way back,” revealed Mobarak.

In comparison, guests from France and Germany tend to engage JungleWalla Tours for hardcore adventures.

Where dollars make sense
Given the high-risk and specialised nature of adventure tours, travellers in this niche sector are more likely to engage professional services – including that of guides and tour operators – than the traditional travel market, noted Martin.

Uzaidi Udanis, general manager, Eyes Holidays, agreed and noted that, in fact, travellers were ready to fork out more than usual for such services. This was evident when his company took FIT travellers from neighbouring countries to Gopeng, Perak, for a two-day, one-night whitewater rafting trip.

“(The travellers) were willing to pay US$500 for the unique experience of being in an all-natural, pristine setting where rapids were of Class One to Class Four,” he shared.

Paul Landgraver, co-founder of Wicked Adventures, said travellers were willing to pay for his packages, which are priced at the higher end of the market. Wicked Adventures draws an increasing number of working professionals from Singapore, Bangkok and Kuala Lumpur, aged 25 to 35.

Wicked Adventures takes travellers to remote Indonesian destinations, such as Komodo, Flores and Sumbawa, where they can engage in active adventures.

Where sustainability matters
Landgraver shared that a percentage of his company’s revenue is channelled to the local community through the Wicked Good Foundation. The latter provides on-the-job training for locals interested in the tourism industry, and funds turtle conservation camp Pante Hera in the Savu Sea Marine Protected Area.

Considering the close relationship between nature, culture and adventure travel, making genuine efforts to engage with and give back to the local community – while taking on the responsibility of environmental conservation – seems the natural course of action for players in the sector.

Where community is key
This brings to mind another niche sector where adventure and experiences of local culture can meet: community-based tourism (CBT).

Guam, located in the western Pacific Ocean and nearest to the Philippines among ASEAN nations, is a choice location for CBT travellers, with culture dating back to neolithic times. Latte stone structures on the island are testament to the culture of her indigenous people – the Chamorros – which dates back to the Latte Period of 2000BC.

Currently, the US island territory receives mostly tourists from Japan and South Korea, which are a few hours’ flight away. However, Guam is looking to promote CBT on the island to South-east Asian markets.

Mark Manglona, marketing manager, Guam Visitors Bureau, shared that his team is looking to set up marketing representation in either Singapore or Malaysia.

One of the island’s key eco-tourism destinations closely tied with the community is The Valley of the Latte Adventure Park. Locals are involved in the tours offered, which feature an adventure riverboat cruise on the Talofofo and Ugum Rivers, kayaking as well as stand-up paddle-boarding.

After all the action, visitors go on a tour of the Latte Stones and an ancient Chamorro village. They are also invited to witness fire-starting and basket-weaving demonstrations and learn about the culture of the Chamorros.

Within South-east Asia, CBT is also thriving. Local communities have been able to benefit from tourism while visitors get to appreciate the heritage of the places they visit. And for this authentic exchange to happen, local communities find value in preserving their environment and way of living.

Where they get the word out
Tapping on the potential of adventure travel and CBT is inevitably tied to responsible promotion.

In mid-February, 347 delegates from 33 countries gathered in Sabah, Malaysia, for the 2020 run of the PATA Adventure Travel Conference & Mart to promote their destinations, network, and better understand the adventure travel market.

Sabah took the opportunity to bring some of the delegates to the renowned Kinabalu National Park, where they learnt about local culture and myths amid unspoiled nature.

They are also encouraged to follow Sabah Tourism on overseas roadshows and tradeshows for promotions.