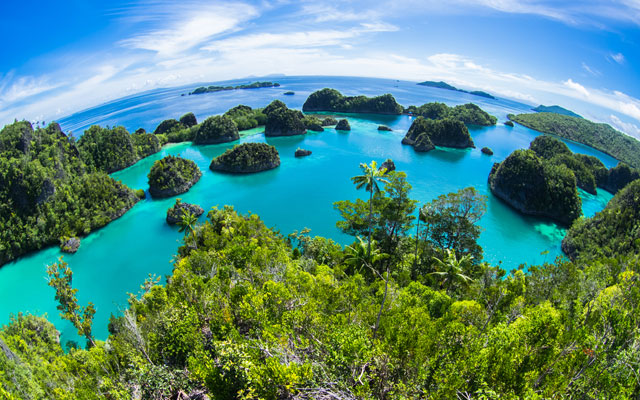 Aimed at protecting the ecosystem, the Raja Ampat administration in West Papua intends to tighten regulation on cruise tourism by rolling out a circular to prevent more cruise vessels from crashing its coral reefs.

The circular will require operators and agents of cruise ships wanting to sail to Raja Ampat to employ locals on board and to pay a deposit to the Raja Ampat administration to ensure the safety of the island’s ecosystem.

The deposit, which will be returned at the end of the trip, will vary from 100 million rupiah (US$7,068) for a yacht to one billion rupiah for a cruise ship.

The move is in response to the separate incidents of MV Caledonian Sky, Aqua Blu and KLM Lamima hitting the coral reefs in the waters of Raja Ampat during the period of March 2017 to January 2020, according to I Wayan Dumya, project manager of G-Tour.

The multiple incidents, he said, had prompted the local government and industry players, such as travel agents like G-Tour, to meet in various meetings to craft regulations that echoed the spirits of conservation, education and empowerment in a bid to prevent repeat episodes.

Wayan said: “The local government is furious at (the incidents) because no one wants to take responsibility for the damage of the coral reefs.”

The local government proposed imposing a deposit so as to make cruise ships more careful, according to Wayan, who had attended the meetings.

However, he added, industry players opposed the proposal on grounds that it would be hard to execute. In the meetings, they also argued that the proposed deposit could make more travellers reluctant to visit Raja Ampat because the regulations would be more complicated.

The meetings did not result in any resolution, and therefore, Wayan said he was surprised by the issuing of the circular, which he said did not involve industry players like himself.

For Ketut Sediya Yasa, managing director of Destination Asia Indonesia, what he deemed more important than imposing a deposit is giving clear guidelines on safe tracks through which certain types of cruise ships may pass and anchor.

If the government could provide such information and enforce those rules, imposing a deposit would be unnecessary, he said.

Questioning the purpose behind getting cruise ships to fork out a deposit, he said: “Is it to prevent them from (escaping after damaging the coral reefs)? I think it will be very difficult for them to do so since they are so big. They also have an agent (in Indonesia) who would certainly have coordinated with the local government and related stakeholders before the arrival of the ships.”

Ketut opined that if implemented, the circular could hit the tourism sector in Raja Ampat because it complicated the process and may make cruise ships reluctant to visit.

Lack of digital and communication technology in Raja Ampat, he added, would also pose a problem to operators and owners of cruise ships when they have to deal with the deposit transaction.

The circular is not final yet, according to Fransiskus Xaverius Teguh, Ministry of Tourism and Creative Economy expert staff on sustainable development and conservation.

Fransiskus said that while the Raja Ampat administration had the authority to issue the circular, he had called on the local government to consult with other stakeholders, including trade players, first as a way to realise quality tourism in Raja Ampat.

“We (central government) agree that the regulation is made to protect and conserve the environment in a sustainable way. What should be underlined is that Raja Ampat’s natural resources, including the beauty of its coral reefs, must always be protected and not exploited excessively. Therefore, regulation is needed to prevent (ships) from being concentrated in main areas,” Fransiskus said.