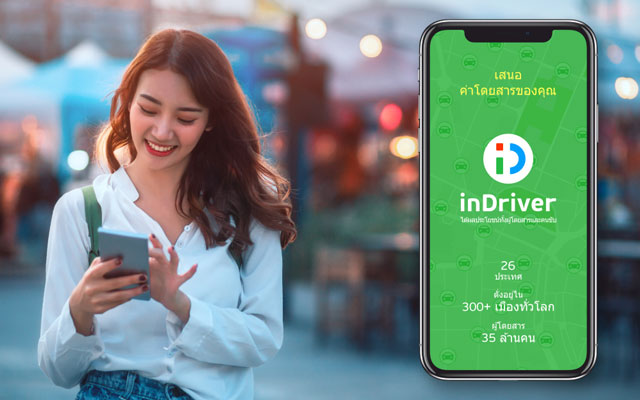 International online ride-hailing service, inDriver, which is headquartered in Mountain View, California, has launched in Phuket.

Unlike other ride-hailing services, for inDriver, drivers are not automatically assigned to riders. The service allows users to set their own fare for their chosen route, while nearby drivers who receive notice of ride requests can choose to accept or ignore the fare offered, or bargain for a higher price.

Once the counteroffers roll in, passengers select the most suitable driver in line with the categories most important to them, in terms of fare, driver rating, estimated time of arrival or vehicle model.

The app’s Real Time Deals model combats algorithms used by other ride-hailing companies, which rack up prices because of peak hours, traffic and request history.

In the initiate stage, inDriver will recommend prices in the app, with a minimum price of 230 baht (US$7).

For a safer ride, passengers also have the option of sharing their GPS location and ride details in real time from the app with trusted contacts.

Travelling with the service, which currently operates on a cash-only basis, can be done throughout Phuket’s city borders and the nearest suburbs.

Phuket is the third city in Thailand, after Chiang Mai and Hat Yai, where inDriver was launched.

inDriver, which can be downloaded for free from the Google Play Store and AppStore, is used by 47 million people across more than 300 cities.