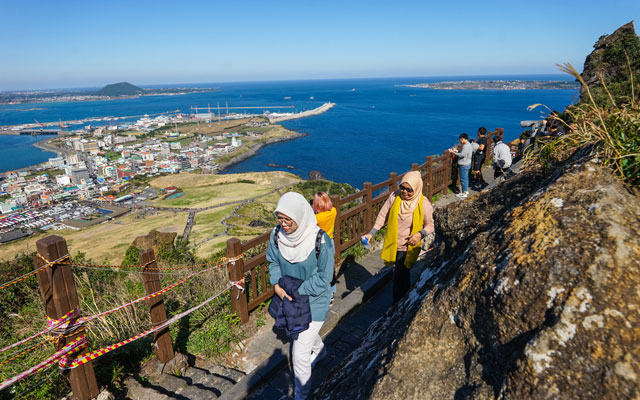 The surge in the number of Covid-19 cases worldwide and in Asia has not hurt the confidence of a segment of Indonesian travellers who continue to throng travel fairs in search of overseas holidays.

In particular, Indonesian travel agents whom TTG Asia spoke to reported that South Korea and Japan – which has the second- and third-highest number of Covid-19 cases outside of China – remain hot destinations among their customers.

Erlyna Ciptadi, outbound manager of Jatra Tour, admitted that the Covid-19 crisis has weakened outbound demand. While she had around 50 outbound bookings on the first day of ASTINDO Travel Fair in 2019, this year’s opening day at the fair drew only 18 bookings.

However, she said that Japan and South Korea were still popular picks among her Indonesian clients who snapped up Sakura tour packages to enjoy the cherry blossom season this April.

Priced at 24 million rupiah (US$1,700), the Sakura package includes airfare and accommodation. To attract buyers, Jatra Tour dangled a one million rupiah discount as well as free SIM cards.

Direct routes and shorter flight times were key factors for Japan’s attractiveness to Indonesian travellers, as compared to longhaul destinations like Europe.

Erlyna told TTG Asia that Indonesians are now more interested in slower travel, such as “breathing in fresh air at the top of a mountain”, and less keen on the usual shopping vacations.

Likewise, Elmareza Ariesta, MICE Manager of Destination Tour, said that Indonesia’s outbound traffic to Japan and South Korea had not been hard hit by the outbreak.

Elmareza added that her customers appeared to be more confident in Japan and South Korea than with destinations in South-east Asia. She recently had a corporate client that postponed a multi-destination tour for its 107 staff members to Malaysia, Singapore and Thailand.

While Akhmed Faezal Alhamdi, MICE manager of Korea Tourism Office (KTO) Jakarta office, admitted seeing rising anxiety among Indonesians who are contemplating trips to South Korea, he said destination promotions were continuing, with the exception of Daegu and its neighbouring North Gyeongsang province, the epicenters of the virus outbreak in the country.

KTO Jakarta office is offering souvenirs and experience programmes for travel agents who managed to bring in at least 10 pax from companies and government institutions, as well as a welcoming ceremony in airport and gala dinner for over 500 pax.

For FITs, Akhmed added, the office is distributing a booklet that grants travellers discounts of at least five percent in destinations they visit.