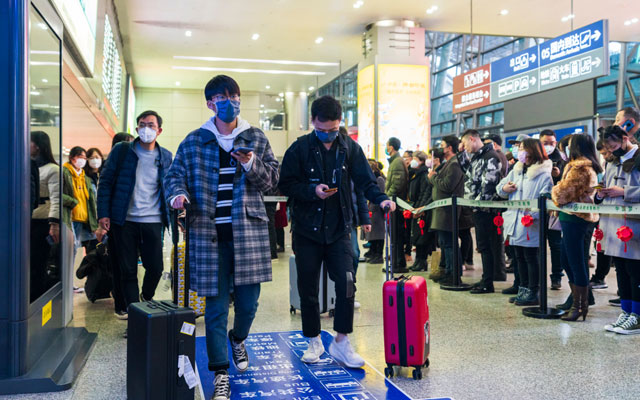 The coronavirus outbreak in China has caused a substantial setback in flight bookings for the Chinese New Year period, from January 10 to February 6, 2020, according to new data from ForwardKeys.

This year, outbound travel reached a new peak and the season was on course to break all records, said ForwardKeys. However, on the week of January 20, the implementation of travel restrictions forced the last batch of Chinese holidaymakers to cancel their travel plans.

By January 26, a slew of cancellations had changed the picture dramatically. Although the vast majority had left before the travel restrictions took effect, the prospect of a record-breaking year was gone.

Up to January 19, outbound travel bookings from China (excluding Hong Kong and Taiwan, where political unrest has impacted travel) were 7.3% ahead, benchmarked against the equivalent period in 2019.

But a week later, as of January 26, when Wuhan airport was closed and the Chinese government stopped outbound tour groups from travelling, bookings for the Chinese holiday period were 6.8% behind.

The dramatic slowdown has affected travel to all parts of the world. Asia-Pacific, the region which attracts over 75% of Chinese New Year travellers, has been worst hit.

China, as a destination, has also been severely affected by the coronavirus crisis. Up to January 19, inbound bookings for the Chinese New Year period were 4.5% ahead of where they were at the equivalent point last year. A week later, they were 7.2% behind.

Olivier Ponti, vice president insights at ForwardKeys, commented: “China is now the world’s biggest and highest-spending outbound travel market, so the presence of Chinese visitors is eagerly anticipated by the tourism industry globally. The economic impact could have been worse if the coronavirus outbreak had struck a couple of weeks earlier.

“Fortunately, most Chinese holidaymakers managed to get away in time and as of now, we don’t see the collapse in travel to China spreading to other countries in the region. However, with the crisis evolving rapidly from day to day and a growing number of airlines cancelling flights to China, close monitoring is needed.”

Its concerns are mainly about what will happen if the virus spreads to countries with weak health systems, and that the purpose of the declaration is to help those countries.