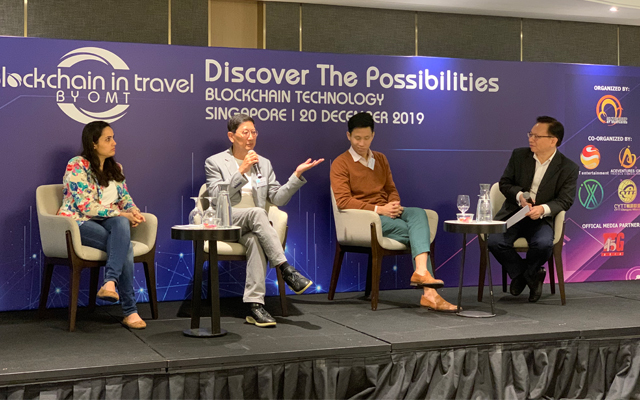 Blockchain is disrupting the travel ecosystem and helping to streamline processes and solve major pain points in an often fragmented industry.

That, and more, was the common refrain among industry experts at the Blockchain in Travel: Discover the Possibilities seminar held in Singapore on December 20, which spotlighted the potential applications of blockchain to benefit the travel industry.

The event was organised by OMT Group, one of South-east Asia’s largest tourism groups, in collaboration with Chang You Travel Alliance, a data-sharing platform employing blockchain technology, and IXX.com, the world’s first digital asset trading community.

KrisPay, Singapore Airlines’ (SIA) blockchain-based digital wallet, allows KrisFlyer frequent flyer programme members to convert air miles into digital currency. This can then be used to pay for items almost immediately at SIA’s merchants in Singapore, including gas stations, beauty product retailers, and F&B outlets. The blockchain is privately-owned by SIA and only network partners can transact on it.

Wong Soon-Hwa, founder and CEO of Asia Tourism Consulting, noted: “This is one way how SIA can convert under utilised points into value for itself and its partners, which would also help improve bottom lines for companies as middlemen are not required.”

Wong pointed out that blockchain isn’t really a product, and is perhaps better described as a service, or “piping hidden behind the walls”. But simple as the process may sound, a “huge mindset shift is also needed to make use of blockchain”.

Elsewhere, three-year-old Tripio is the first blockchain-based travel booking marketplace which has 450,000 hotels on its platform. With blockchain in play, Tripio helps hotels to avoid the problems of high commission fees charged by OTAs, false reviews, and inaccurate updates on room status which may cause problems for the traveller upon check-in.

“By using blockchain, the money paid by the customer gets logged into a smart contract (a self-executing contract with the terms of the agreement between buyer and seller being directly written into lines of code). When the services are rendered – depending on the outcome of the service – the money will then be transferred to the service provider,” said Dwivedi. In the event of disputes, the money goes into dispute resolution.

On the backend, blockchain can also be used for more efficient payments between service providers such as airlines and rental car companies, boosting operational efficiency as well as baggage handling; while governments may also be able to use it for KTDI.

In terms of baggage tracking, companies will now be able to track the origin of an asset, all the way to its end point. Blockchain makes it easier to trace a piece of baggage, as it has a decentralised database, which makes it easy to share data across several parties.

Meanwhile, KTDI is a joint initiative by the World Economic Forum, Accenture, the Canadian and Dutch governments, and Marriott International, that aims to create a more seamless experience for travellers by using blockchain to solve the exchange of identities and verification.

“What KTDI does is that it enables partners to have links to travellers’ identities on the blockchain, as opposed to direct identities (such as passports). This makes data privacy and security stronger, and allows real-time sharing of data on a very secure network with encryption, hence the data is impossible to hack,” Dwivedi said.

Aside from allowing travellers to decide who they want to share the data with and how it’s going to be used, KTDI will enable its partners to access verifiable claims of a traveller’s identify to access their credibility and optimise processing through security channels.

“Once I have been approved by multiple countries that I’m a fairly safe or decent traveller, these attestations can become my reputation, which would make my travel experience smoother,” thereby, translating to lesser visa applications and paperwork, Dwivedi noted.

She added: “What blockchain can really offer is the improvement of customer service. It can be done in different ways, but at the end of the day, it helps to make the life of a traveller much more convenient, and their overall experience, a lot more pleasant.”

“Will blockchain succeed (in the travel industry)? A resounding yes. I’m not sure how long it will take, but many are increasingly embracing it in the travel and tourism industry. While its final form or shape may differ, blockchain is here to stay,” concluded Wong.