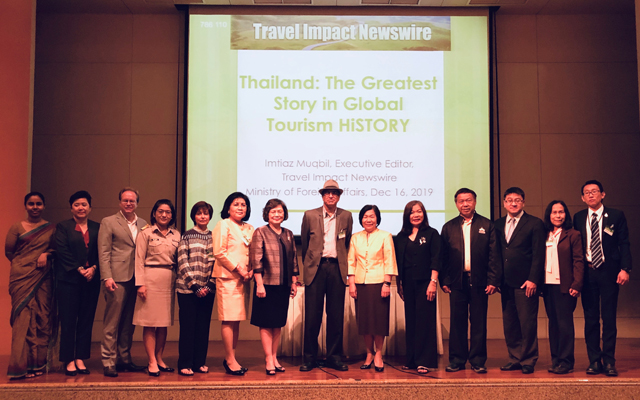 As Thailand’s tourism industry gears up to mark its 60th anniversary in 2020, it is an ageing sector in need of a few nips and tucks for its own long-term interest, cautioned industry veteran Imtiaz Muqbil.

“In the past years, Thailand has been hit by every kind of disaster known to mankind but its tourism figures have grown exponentially – this, to me, is what makes Thailand the greatest story in tourism history. These things don’t happen because of a fluke, but because of people,” Imtiaz said.

“Today, Thailand’s tourism industry is an ageing industry that needs a complete check-up, and health and wellness survival plan. We need to look at sustainability. We did not listen to a word King Rama IX said on the sufficiency economy philosophy – it’s the best advice that the world has ever known for economic development. But in the tourism industry, nobody cares. It’s all about numbers and growth.”

Imtiaz, who is the executive editor of PR Travel Newswire and one of Thailand’s longest serving travel trade journalists, was speaking at the seventh instalment of the Thailand: The Greatest Story in Global Tourism forum series, where he recounted the epiphanies, turning points and key figures in history that has played a significant role in industry growth.

Organised by Imtiaz alongside Thailand’s tourism industry leaders, the seminar is part of a series spotlighting Thailand’s storied tourism history, in the lead up to the 60th anniversary of both the Tourism Authority of Thailand (TAT) and Thai Airways in 2020.

Hosted on December 16, 2019 at Thailand’s Ministry of Foreign Affairs, the event was attended by diplomats from numerous embassies, academics from prominent Thai universities and industry experts, including representatives from Thailand Convention and Exhibition Bureau, the Tourism Council of Thailand, and the Professional Tourist Guide Association of Thailand.

Pointing out the importance of hindsight, Imtiaz said: “As we approach the turn of the decade, the Tourism Authority of Thailand and Thai Airways are both (approaching) their 60th anniversaries. Yet, not a single Thai university has a proper course on Thai, ASEAN or Asia-Pacific tourism history.”

“Globally, tourism is a sunrise industry going forward – it’s the only industry that meets all the UN Sustainable Development goals. Thailand has a lead start in this. We just need to fix some of our deficiencies (with) more behavioural change and cost benefit analysis. (We need to change) the parameters of measuring success from just numbers, because sometimes the actual cost is more than the benefits. Prevention is key – there’s an importance in heeding early warnings.”

Imtiaz’s upcoming book, 110 Factors that Shaped Thai Travel & Tourism, will be self-published in 2020.