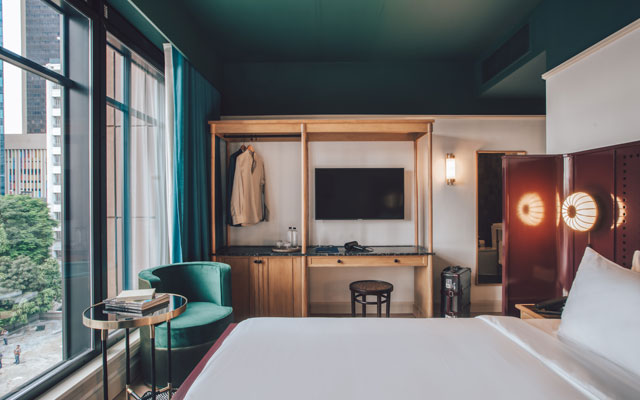 The Chow Kit, and MoMo’s KL, Malaysia
Ormond Hotels has opened two adjacent properties in the Chow Kit neighbourhood at the heart of Kuala Lumpur.

The Chow Kit – an Ormond Hotel boasts 113 rooms and suites, all of which come furnished with an open wardrobe and desk space, as well as a smart TV. Amenities include The Chow Kit Kitchen, an all-day diner serving both continental and Malaysian-inspired dishes; as well as a yoga pavilion – which will host a series of weekly yoga and meditation sessions – on the rooftop.

There are also function spaces on-site, which include The Library, a ground floor space that can host private dining parties or small meetings for up to 10 pax; while the mezzanine space can also be converted into additional meeting and event rooms. The hotel will also offer themed walking food and culture tours of the Chow Kit neighbourhood.

At neighbouring MoMo KL’s, Ormond Group second social hotel brand, there are 99 micro-rooms within, each furnished with smart TVs and a safe, alongside MoMosita’s, a casual concept serving up Mexican dishes and snacks alongside draft beer and bottled cocktails.

MoMo’s KL has also replaced the traditional lobby with a social space that acts as the central hub of activity, The Playground. This will be the hotel’s main events space which will host a series of weekly events from performance art, workshops and exhibitions to DJ sets and live gigs. The Ritz-Carlton, Perth, Australia
Part of the landmark development at Elizabeth Quay, The Ritz-Carlton, Perth offers 205 guestrooms including 19 suites, each furnished with Frette bedlinens and bath amenities by British luxury brand Asprey. Guests staying in the 277m2 Ritz-Carlton Suites also have access to the club lounge, which features mixology demonstrations, five culinary presentations during the day.

Amenities on-site include a spa, fitness centre and yoga studio, and three F&B options. Event planners may avail the 2,000m2 of conference space, the largest of which is the 550m2 Elizabeth Quay Ballroom which can be further divided into three smaller rooms. Pullman Huizhou Kaisa, China
Pullman Huizhou Kaisa has opened within the city’s downtown district, part of Kaisa Huizhou Building, the tallest building in the city. The 307 guestrooms, including 13 suites and 14 family rooms, are all outfitted with the brand’s signature Pullman Bed. Guests will have access to recreational facilities such as 2,000m2 recreational space, an indoor swimming pool on the 46th floor, spa; as well as an all-day dining restaurant. Event planners may avail the 10 indoor meeting and function spaces, comprising a 800m2 pillarless Grand Ballroom with built-in LED screen.