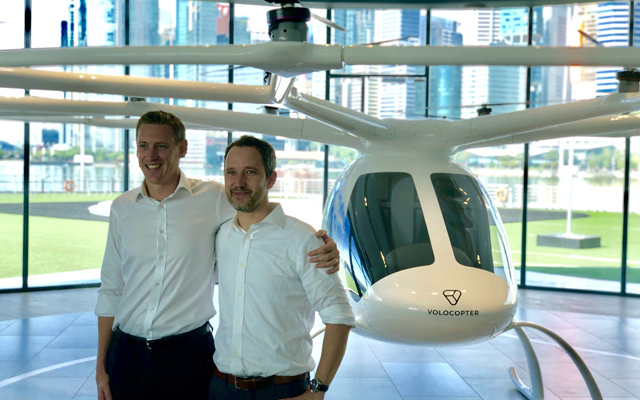 Urban air mobility solution Volocopter, which is kickstarting its trials in Singapore, has launched its first public Proof of Concept flight at noon yesterday.

Held as part of the 26th Intelligence Transport Systems World Congress from October 21-25, the Proof of Concept flight is a piloted flight taking place at The Float @ Marina Bay. The two-seater aircraft is the second generation of vehicles, called Volocity, which can fly up to 35km per ride.

Volocopter’s CEO Florian Reuter shared: “We follow the regulations for a high degree of safety as set by the European Authority for Aviation Safety, which are as high as those set for the commercial airlines. We want to turn our vehicles fully autonomous as soon as we can.”

He explained that although the aircraft have the capability to be fully autonomous, the concept of urban air mobility can still benefit from public acceptance and familiarity. As such, the public trials and commercial flights upon launch will be manned by a fully licensed pilot.

In anticipation of the scaling up of demand and operations, Volocopter has also signed with car partners Mercedes Benz and Didi to produce the aircraft in large quantities, said Reuter.

Along with the test flight, Volocopter also unveiled a prototype of The Volo-Port, a full-scale air taxi vertiport created in collaboration with Skyports. This hub is where passengers will be registered through biometric or traditional passport processes, clear security checks, as well as embark on their flights.

A series of these vertiports are set to pop up across the island as both companies continue to meet with various attractions and landlords in Singapore, said Duncan Walker, managing director of Skyports.

He added: “The end game is for the pricing of each ride to be comparable to a taxi ride. This is a transport solution that is meant to be for the masses. We aim to fly to places that are harder to access and are pain points of travel, and certain routes already look interesting to us – for example, getting from Marina Bay to Sentosa Island. It is possible to get a taxi, but some tourists might want to take a more scenic route.”

Over the following days, Volocopter will hold infrastructure showcases to potential destinations in Singapore, as well as mayors, politicians and regulators from other Asian cities, to pique interest in the solution.

“If we get any major buy-ins, there are many Asian cities that we are excited to go into,” said Walker.