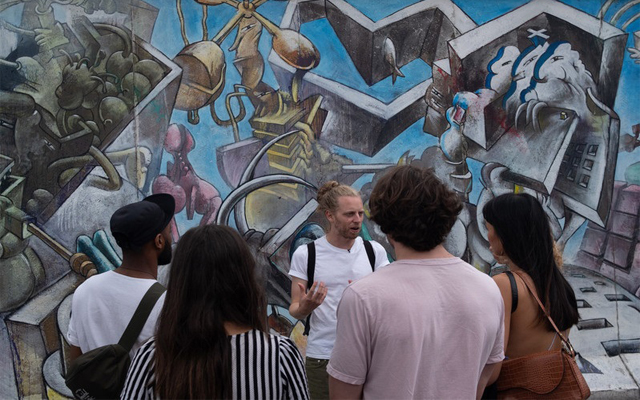 A Cascais street art tour hosted by local residents in Lisbon, a Refugee Voices tour led by a Syrian refugee in Berlin, a walking tour of Covent Garden guided by an ex-homeless Londoner and a reforestation project in Iceland’s Haukadalur valley are just among Contiki’s newest offerings of conscious travel experiences for Europe trips in 2020.

Those offerings are part of the travel provider’s new commitment to have a conscious travel experience on every single trip by 2021.

The brand-new conscious travel experiences have been handpicked especially for travellers aged 18 to 35, aiming to give Contiki guests a fresh perspective while also giving something back to the communities visited on their trips, and delivering to the growing trend for conscious and ethical travel among Gen-Z travellers.

The Cascais street art tour in Lisbon showcases the culture of a Cascais neighbourhood that was historically regarded as dangerous and blighted by poverty. The local street artists knew the perceptions of the place were unfair, so they started a project of regeneration, creating a unique urban art gallery. Travellers will be taken on a walking tour through the neighbourhood to learn about the street art in the area, the residents who have created it and what they hope to change with their art.

Unseen London is a not-for-profit walking tour hosted by men and women who have experienced homelessness in London. The guides know the secrets of London’s winding historic alleys better than anyone, and will show travellers a fascinating city not usually seen by tourists. Travellers will be taken to Covent Garden in the heart of London’s theatre and arts district for a unique insight into the city’s culture.

The Berlin Refugee Voices tour, led by a Syrian refugee, take travellers to places of historical significance in Berlin. The guide draws parallels between Europe in the 20th century and what has happened to Syria in the 21st, using Berlin’s turbulent past to gain a new perspective into the attitudes that Syrian refugees face in today’s world. Travellers will hear first-hand the story of a Syrian refugee, the struggles of displacement and the experiences that come from creating a new home in a new city.

The Iceland Reforestation programme is located in the Haukadalur valley, a geothermal wonderland on the popular Golden Circle route. Iceland has suffered intense deforestation throughout its history, with forest coverage dropping to as little as 0.5 per cent by the early 20th century. As part of a Golden Circle tour, travellers will get to reduce their carbon footprint and leave their mark in Iceland by planting five trees each in the valley.

Alongside the four new conscious travel experiences, the new Contiki trips also include a variety of foodie experiences that give back to the local community, like a Salzburg Farmers’ Dinner in Austria, where guests get to eat locally grown produce that supports local farmers; Dining with Locals in Bosnia, which features homemade dinners prepared with local produce that supports the Sarajevo community; a farm-to-table meal at Stella Croatica in Split, which boasts authentic Croatian family recipes and local ingredients with minimal environmental impact; and an Icelandic dinner at Efstidalur organic farm, where visitors can eat homemade delicacies like cheeses and skyr from local recipes.