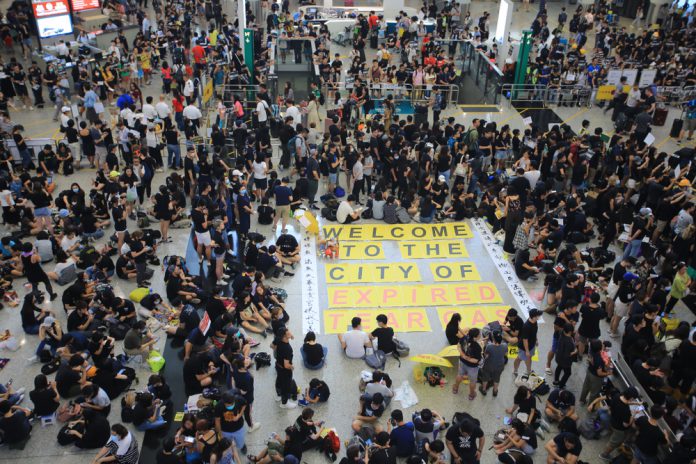 The escalating wave of violent clashes and protests in Hong Kong in recent weeks has clearly put a damper on travel to the city, as tourism and hospitality businesses are starting to feel the impacts from mid-July, with no end in sight.

More than 300 flights were cancelled yesterday after the Hong Kong International Airport (HKIA) announced a sudden closure following a mass sit-in protest at the facility on August 12. Flights at HKIA were disrupted for the second consecutive day following police clashes at the airport, according to a BBC report.

According to a Straits Times report, flights resumed on Wednesday after the Airport Authority Hong Kong obtained an injunction to stop demonstrators from obstructing operations of the airport. The authority also said people would be banned from attending any protests or public events outside areas designated by them.

Already, HKIA’s sudden closure has severely curtailed inbound and outbound travel. According to Travel Industry Council of Hong Kong, at least 120 outbound group tours and 2,600 people were affected by the flight disruptions at HKIA on August 12 and 13.

Sunflower Travel Service’s general manager Johnny So told TTG Asia: “The shutdown of HKIA on August 12 affected five to six group tours. I am not sure whether additional tours departing today and tomorrow will be affected because it depends on how soon the backlog of flights will be cleared.”

“Apart from airport operations (disruptions), another concern for me is whether Cathay Pacific Airways’ operations will be bogged down by Civil Aviation Administration of China’s new aviation safety regulations (banning staff who took part in illegal Hong Kong protests from flying over the mainland airspace). If issues happen, I worry about the impact and my groups can’t set out on time,” he expressed.

Sandy Ho, country manager for China & Hong Kong, Buffalo Tours, said: “The biggest impact so far was the (airport closure) as flights were cancelled, sending a message to overseas visitors to think twice before coming with factors like flight disruptions, safety and protest activities (now in the picture).”

“As visitors also include Macau as a twin destination, (the ongoing crisis) will inevitably hit Macau as they usually stop over in Hong Kong first.”

Industry watchers fear the airport closure on August 12 and 13 would worsen the already-precarious situation in Hong Kong.

According to a report by ForwardKeys, in the almost eight-week period from June 16 to August 9, flight bookings to Hong Kong from Asian markets have fallen by 20.2 per cent compared to the same period last year.

The bookings data excludes China and Taiwan, with ForwardKeys explaining that a fall in bookings from those destinations in the latter part of June could also be explained by the timing of the Dragon Boat Festival, which fell 11 days earlier this year than it did in 2018.

In the first fortnight (June 16 to 29), bookings fell nine per cent and in the second (June 30 to July 13), 2.2 per cent. At that point, it appeared that the demonstrations were having a short-term impact on short-haul travel.

However, a dramatic drop of 33.4 per cent in bookings was recorded in the following 27 days (July 14 to August 9). There is now clear evidence that the protests have reversed a positive travel trend in which bookings for the first six and a half months of the year were up 6.6 per cent on 2018.

David Tarsh, spokesman for ForwardKeys, said: “The situation in Hong Kong has deteriorated substantially in the past eight weeks and particularly so in the past four. During June and early July, ForwardKeys saw no decline in longhaul bookings to Hong Kong. However, that is no longer the case. From June 16 to August 9, longhaul bookings to Hong Kong are now 4.7 per cent down on the equivalent period last year.”

He added: “Furthermore, ForwardKeys’ latest numbers do not yet include the events of Monday, when all flights were cancelled and video of police clearing protestors from the airport were beamed around the world. So ForwardKeys is not optimistic about reporting a recovery in the immediate future.”

Meanwhile, travel operators are keeping a close watch on the ground and providing constant updates to keep their clients in the loop.

In an update sent yesterday evening, Destination Asia Hong Kong stated that “the situation in Hong Kong is becoming increasingly fluid and more difficult to predict. Our management team is on full alert and in regular contact with agents whom have guests on the ground or scheduled to arrive in coming days. For those guests affected by the events, we have alternative plans in place.”

This morning, Connexus Travel also advised travellers to reconfirm their flight schedules before setting out for HKIA today.