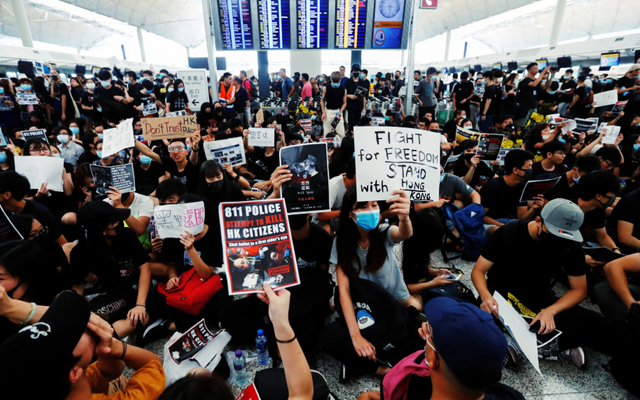 Operations have restarted at Hong Kong International Airport (HKIA) early Tuesday morning, a day after a massive pro-democracy protest forced its abrupt closure yesterday and stranded thousands of passengers at one of the world’s busiest transportation hubs.

Check-ins had resumed early today at the departures hall and information boards showed several flights were boarding soon or about to depart, according to a AFP report. Only a number of demonstrators remained in the airport, though protestors have said they plan to resume their demonstrations at the airport later today, the report added.

According to a South China Morning Post (SCMP) report, the Hong Kong Airport Authority announced the cancellation of all flights after 18:00 local time yesterday due to the mass protest. About 180 outbound flights and 45 inbound flights were cancelled, said the SCMP report, but a lack of information from airlines resulted in many passengers continuing to arrive at the airport unaware of the cancellations.

The sudden closure of HKIA also left Asian airlines grappling with the fallout, with Singapore Airlines and its subsidiary Scoot, as well as the Philippines’ Cebu Pacific and Malaysia Airlines among carriers forced to re-route or turn their flights back to their country of origin, SCMP reported.

HK Express had yesterday issued a travel advisory on the disruption of airport operations at HKIA due to the public protest, resulting in the cancellation of some HK Express flights between August 12 and 13.

The airport closure was the latest in Hong Kong’s ongoing anti-government protests, which show no signs of abating more than two months after they were sparked by a controversial extradition bill but has since morphed into wider resistance against encroaching control from Beijing.

Although Hong Kong tourism authorities insist it is safe to travel to the city and many attractions remain open, many governments have increased their safety alerts for Hong Kong in recent weeks.

A travel advisory issued by Singapore’s Ministry of Foreign Affairs advised Singaporeans “to avoid any reported locations of upcoming protest rallies and other large public gatherings”.

The US State Department has issued a level two travel advisory for Hong Kong, warning travellers to “exercise increased caution in Hong Kong due to civil unrest.”

Destination Asia Hong Kong has issued a newsletter to clients that it is monitoring the situation closely and is in close contact with all agents with guests on the ground or scheduled to arrive in coming days.