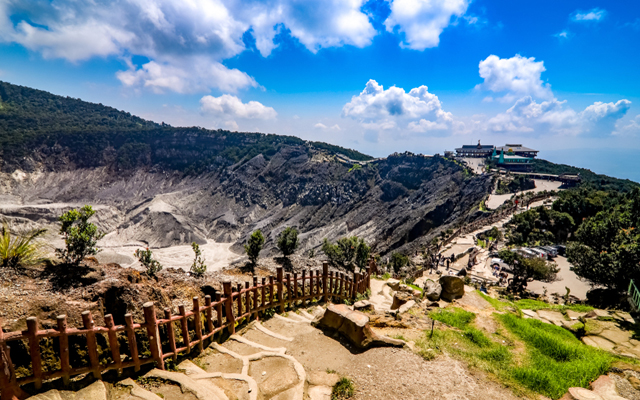 The travel trade in Bandung, West Java, continues to stay alert as Mount Tangkuban Perahu, a popular tourist attraction in Indonesia, is showing an increase in volcanic activities.

The Center for Volcanology and Geological Hazard Mitigation raised the level of warning status of the mountain from normal to caution after it erupted again on Thursday evening and Friday morning, with volcanic ash soaring 180m from the bottom of the mountain’s crater. This follows the earlier eruption of the volcano on July 26.

Budijanto Ardijansyah, chairman of the Association of Indonesian Tours and Travel Agencies, West Java Chapter, said that the Mount Tangkuban Perahu tourism park remains open, but he has instructed members of his association to restrict access to it in order to ensure the safety of tourists.

Budijanto is upbeat that the eruption of the Mount Tangkuban Perahu will not have a significant negative impact on tourism, citing the reason that West Java is rich in tourist destinations.

“For tourists, we divert travellers to other popular tourist spots in Bandung, such as Kawah Putih (White Crater) and Patenggang Lake. These places are safe,” he said.

Daniel Nugraha, the owner of Exotic Java Trails Tours & Travel, said that since the eruption began on July 26, none of his guests from countries like Malaysia, Singapore and the Netherlands has made a cancellation. It was presumably because the eruption did not affect operations at the Kertajati International Airport in Majalengka and the Husein Sastranegara Airport in Bandung in West Java.

He said that his guests remained excited although he removed Mount Tangkuban Perahu from the list of tourist destinations in his tour packages, and replaced it with other spots, such as the Lodge Maribaya amusement park.

“They did not protest against the change. (Everyone wants) to stay safe and that is why it is much better to not approach the mountain,” he said.

Herman Muchtar, chairman of the Indonesian Hotel and Restaurant Association, West Java Chapter, said that only two out of the approximately 700 hotel members across Bandung City and Regency has reported cancellations due to the latest eruption.

“We hope that the situation will become normal immediately,” he said.

Elsewhere, a 6.9-magnitude earthquake hit Banten, West Java on Friday evening. The epicentre of the earthquake was located 147km south-west off Sumur coast, Banten, at a depth of 10km. A tsunami alert was on for about two hours, but it did not happen.

The earthquake shook the neighbouring Jakarta, Bandung and Lampung, and its effects were also felt in places as far as Yogyakarta and Bali. However, all operations in the region are running as per normal.