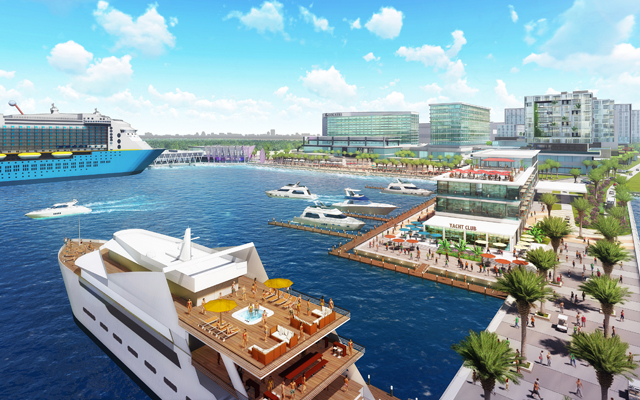 Construction is poised to begin this year for the Philippines’ first-ever dedicated cruise pier and terminal, which stands adjacent to the Solaire Resort and Casino in the Entertainment City hub along Manila Bay.

The cruise and marina complex is a “milestone” and “game-changer” crucial to the advancement of the Philippine’s cruise tourism, said Jing Esmana, Department of Tourism’s (DoT) head, cruise team, office of product and market development.

The lack of cruise facilities led the DoT and the Tourism Infrastructure and Enterprise Zone Authority to eye having a cruise port within the Cultural Center of the Philippines complex. But a feasibility study noted certain challenges owing to other proposed developments in the area, including a huge reclamation project.

There was also a proposal to build a cruise pier within the Manila Yacht Club but Bloomberry Cruise Terminal beat it by being the first to submit the Solaire Cruise Center plan, and there cannot be two cruise ports in Manila.

After obtaining its Environmental Compliance Certificate from the Department of Natural Resources and Environment in May, Solaire will begin construction of two linear berths totalling 685m and an additional two mooring dolphins.

“The wider berth close to shore is designed for homeport vessels (and) the second berth designed for port of call (international) vessels,” Lucci said.

The next phase in the construction of the cruise centre involves the development of the terminal building for homeport passengers and a yacht marina. Planning is underway in terms of demand and the timeline is dependent on the planning process.

Upon completion, Solaire Resort and Casino will also be home to a marina with yacht and charter boat facilities. The yacht marina will complement the tourism offerings with the eventual provision of yachts for shore excursions to nearby islands.

“We expect this facility to play a role of catalyst for the expansion of sustainable cruise tourism in the Philippines. A high-end world-class mega yacht marina is long overdue in the region. We fully expect that the combination of the luxury of Solaire Resort and Casino and a world-class mega yacht facility will be a successful combination that will serve the fast- growing Asian yachting market”, Lucci explained.

He added: “The cruise market in Asia homeported from Shanghai, Beijing and Hong Kong is growing, and the cruise lines need more destination traffic. The market to and from Manila is already growing, and having a dedicated berth for cruise lineswithout having to compete with cargo and traffic will be a significant step forward.

“In regional terms for cruising, the increased demand for a world-class cruise facility between the two cruise regions centered around Singapore to the south and Shanghai/Hong Kong to the north makes the timing of the development of Solaire Cruise Center ideal not only to enhance the offering of the existing world class facility, but also for the Philippines as a whole.”