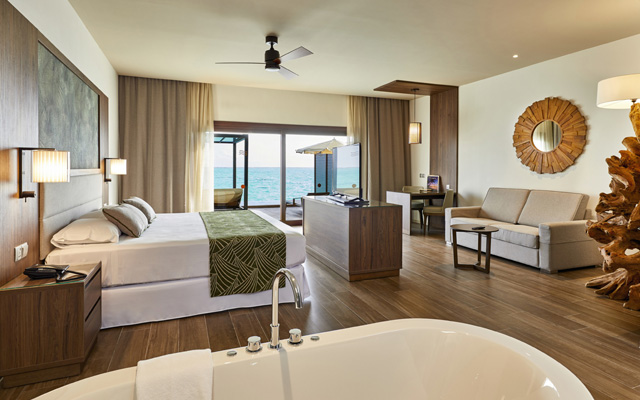 Riu Atoll, located on the private island of Maafushi, offers 264 rooms, 36 of which are over the water. The hotel has a main restaurant, Dhoni; an Italian restaurant Sophia; and the Beef Steak House. It also has a 24-hour Sports Bar, the salon bar Bodeberu; and a swim-up bar Tequila. Families will enjoy access to a pool, children’s play area and the RiuLand kids’ club.

On the neighbouring private island Kedhigandu sits Riu Palace Maldivas, featuring 176 keys, 72 of which are suites over water. Not only do guests at this resort have access to the bars and restaurants at Riu Atoll, they also enjoy exclusive access to the main restaurant Palm; the fusion restaurant Krystal; and the Japanese restaurant Yu Hi. The resort also offers guests a Paradise bar located in an infinity pool and a chill-out zone.

Guests from both resorts will also be able to enjoy access to a wellness centre offering various spa treatments, as well as a gym and steam room. Four Seasons Hotel Bengaluru at Embassy One, India
The second Four Seasons property to open in the country features 191 rooms and 39 suites set amid 2.3ha of landscaped gardens. There are no less than six F&B options on-site, including the Far & East restaurant serving Chinese, Japanese and Thai cuisines on the 21st floor. Making up the recreational facilities are the Infuse Spa with 11 treatment rooms as well as an outdoor pool.

Event planners may avail the 1,540m2 event spaces ranging from the Grand Ballroom and open terrace, the largest of which can accommodate up to 1,000 guests. Shadow Play by Peppers, Australia
The luxury hotel in Melbourne’s Southbank district features 70 keys across one- and two-bedroom apartments, all of which come with full kitchen and laundry amenities. Facilities on-site include an outdoor heated pool, gym, sauna and steam room, barbecue area on level nine, and a restaurant and bar on the ground floor. There’s even an enclosed garden space on the 46th floor, complete with a fireplace, guest lounge, and library with an adjoining patio. Mercure Ambassador Ulsan, South Korea
Mercure Ambassador Ulsan is the first international branded hotel to debut in Ulsan Metropolitan City, along the south-eastern coast of South Korea. This Jeongja Beach hotel offers 131 guestrooms with ocean views, and come furnished with Simmons bedding and a 49-inch LED TV. Amenities on-site include the Opus restaurant, spa and fitness centre. For events and corporate meetings, the hotel offers an outdoor terrace, as well as five meeting rooms that can cater up to 250 guests. Pullman Shanghai Qingpu Excellence, China
Situated on the western side of Shanghai, Pullman’s latest China opening features 292 guestrooms and 16 suites, seven family rooms and one presidential suite. Its four dining establishments include a variety of options, ranging from the international Yue Café to a modern steak and seafood house, Q – Seafood & Grill. Other facilities include the Fit Lounge with a heated indoor swimming pool, a business centre and an executive lounge.

The hotel has more than 1,600m2 of banquet space, with the largest ballroom in Qingpu supported by seven function rooms. The 800m2 Grand Ballroom is pillarless, and boasts an eight-meter-high ceiling, as well as an 80-inch LED screen. The ballroom is also connected to an outdoor terrace, suitable for evening cocktails and al fresco gatherings.