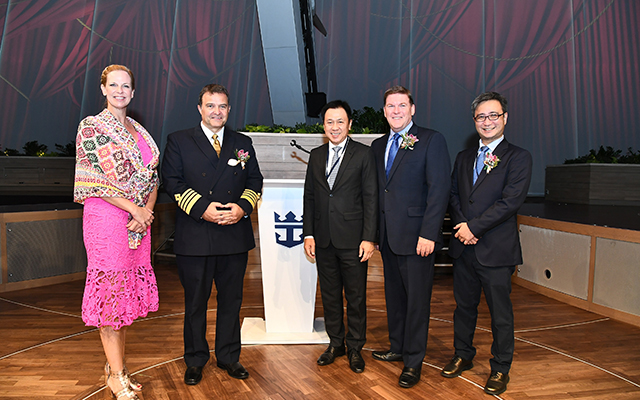 The cruise line’s first Quantum Ultra Class ship, Spectrum of the Seas weighs 170,000 gross registered tonnes and has a capacity of more than 5,600 guests and 2,137 staterooms.

Onboard offerings include features such as a VR bungee trampoline, a skydiving simulator, high-tech multimedia shows and robotic bartenders.

Before homeporting in Shanghai in June 2019, Spectrum of the Seas will offer three sailings from Singapore.

The arrival of Spectrum of the Seas marks the start of Royal Caribbean’s “Double Quantum Year” in Asia. Following hot on the heels of this new vessel, sister ship Quantum of the Seas will return to Singapore in November 2019 for 34 sailings until April 2020.

Following which, it will add a new homeporting season in Singapore, sailing in the region from October 2020 to April 2021. This additional deployment will add some 180,000 guests to the Singapore cruising scene, said Royal Caribbean’s senior vice president international, Gavin Smith.

“We are seeing a great response to these larger ships in Asia – the three Singapore sailings on Spectrum of the Seas this and next week are sold out. We are confident of growing the Asian market, especially for the multigenerational family and millennial segments,” he said.

Smith credited trade partnerships with entities such as Changi Airport Group and the Singapore Tourism Board for the growth of cruise tourism in Asia.

Royal Caribbean’s managing director, Asia-Pacific, Angie Stephen, added: “We’re seeing growth not only in Singapore, but also from the region outside of Singapore. Singapore is an incredible hub, so people want to come to Singapore, spend a couple of days here, and then jump on a ship to see a little bit more of the region.”

However, she revealed to TTG Asia that the largest obstacle the cruise line faces in Asia is the lack of product awareness.

She said: “The penetration (into this market) and amount of people (in Asia) who cruise is still a very low number. The biggest challenge we continue to have in this region is awareness and education. We need to get the word out that cruising is affordable, that there’s plenty of things to do and it’s hassle-free.”