As TTG Asia marks 45 years of publication, industry members and former staff reflect on their fondest memories, ideas and people that have illuminated over four decades of original travel trade reporting 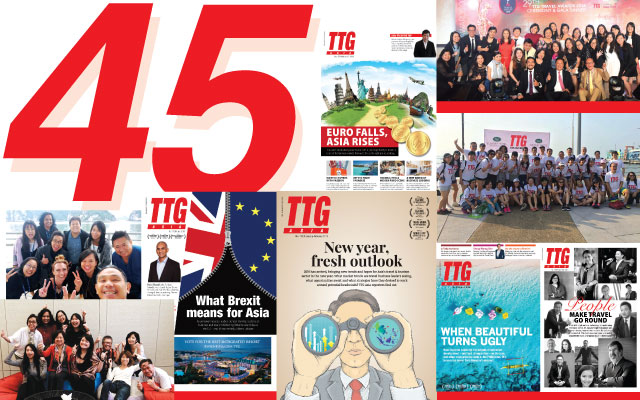 LAURENT KUENZLE
CEO, Asian Trails
Congratulations on TTG’s special anniversary! You have had an incredible journey and through it all, always remained on top of all the Asian professional travel news publications. Kudos to the superb news team and I look forward to many more years of exciting news and interesting travel stories. I always loved the TTG ATF parties – the best networking parties ever and never to be missed!

BENNETT PETER
General manager, Hyatt House Kuala Lumpur, Mont’Kiara
For the past 20 years, TTG Asia publications have always been a read that I look forward to. Through various postings around Asia, it was always comforting to see the familiar mail, wrapped in plastic, that kept me connected to the travel industry in the region. Brought more so to life is when we would meet the editors, reporters and business executives of TTG at the various travel tradeshows. With TTG Asia, it’s not just a good read, but it was more of an irrational loyalty and as an acknowledgement that if it was important news – you can be sure TTG would cover it.

RONALD WU
Chairman, Hong Kong Association of Travel Agents (HATA)
Congratulations on TTG Asia’s 45th anniversary! TTG has always been very supportive of HATA in featuring our stories and events regularly, including our 60th anniversary diamond jubilee celebrations in 2017, as well as our recent 2018 convention to Dubai. With such a broad range of readers across the globe, HATA is very fortunate to be consistently featured on this influential platform amongst the travel industry.

TUNKU ISKANDAR TUNKU ABDULLAH
Group executive chairman, Melewar Group Berhad and former president of Malaysian Association of Tour & Travel Agents
TTG Asia is my “go to” for the latest news in travel and tourism in Asia. From the printed copies mailed to my office, the dailies at conferences and travel marts that continue to provide the latest gossip and tidbits, and the daily online news, it is the “rag” I look forward to reading from cover to cover. The TTG Awards is also the icing on the cake for so many deserving travel-related companies in Asia including my company, Mitra Travel, which has received this prestigious recognition several times.

LEE CHOON LOONG
President/CEO, DiscoveryMICE
“You deserve to win the sticky buyer award”, the words struck me like a bolt of lightning as I stared into her eyes searching for some sense of clarity. My mind blurred as I put on a wry smile and thanked the lady whom I just had an appointment with at TTG’s IT&CM Asia in Bangkok. My thoughts ran wild. Who in their right mind would want to be labelled as a sticky buyer? Isn’t a sticky person troublesome … OMG! Was I difficult to her? Maybe I was clingy and overstayed my appointment. The sticky buyer remark remained a sticky mystery for a long time.

Some years later in 2015, when Taiwan won a marketing and promotion sticky award for its extraordinary corporate mementos did I realise that being sticky means “memorable” in advertising jargon. The revelation was a watershed moment for me. For the sticky awards idea, TTG truly deserves a sticky award themselves.

JASON WONG
Chairman, Travel Industry Council of Hong Kong
Since my first encounter with TTG Asia years ago, reading the publication became one of my ways of exploring new ideas. Its comprehensive and informative journalism gives us the inspiration to develop new services and widen our thoughts. Today it’s even easier to access this great content across a range of different platforms including print, digital, and an e-Daily bulletin. TTG Asia has evolved with the times and I look forward to many more successful years ahead.

PARITA NIEMWONGSE
Director, human capacity building programme, PATA
I’ve been working with TTG since I started my communications career at PATA many years back. I admire TTG team’s spirit of professionalism, trustworthiness and fun. I’m lucky to work with many TTG colleagues on various programmes, just to name a few such as Darren Ng, Caroline Boey, Raini Hamdi, Lina Tan and of course the late Patrick Tan who always took many great group pictures of the PATA team for PATA Travel Mart’s dailies with boundless energy, passion and laughs.

PAUL PRUANGKARN
Director, communications & external affairs, PATA
It’s been an absolute pleasure working with the TTG team over the past years. I am impressed not only with the fantastic attitudes and professionalism of the staff and management, but also their work in covering the latest news in Asia and standing out as a leading travel trade resource. I always look forward to connecting with them at PATA and other events in the region alike.

JENNY WONG
Former editor, TTG China  (formerly TTG Chinese)
I joined TTG Asia in 1995 as editor of TTG Chinese before it was revamped into TTG China. It was my first time working for an international publication. The team was young and energetic, and there were lots of fun and laughter.

In addition to fam trips and travel conferences around the world, I got the chance to attend the historical handover ceremony of Hong Kong to China on June 30, 1997. It was a most memorable moment in my lifetime. Thanks, TTG!

HIRAN COORAY
Chairman, Jetwing Hotels
I will not be wrong when I say TTG Asia has been the most informative travel industry publication. I have spent years with PATA and so did TTG. During the good and bad times of Sri Lanka tourism, TTG continued to support us and we are grateful for that. We wish TTG the very best.

UDAYA NANAYAKKARA
Former chairman, Sri Lanka Tourism
When I was chairman of the Travel Agents Association of Sri Lanka 20 years ago, tourism was suffering with bombs going off in Colombo and various other places. At that time I came out with an idea of promoting Indian tourism to Sri Lanka, TTG was one of the publications that helped to promote tourism from India to Sri Lanka, marking the start of Indian tourism to Sri Lanka. TTG gave us the fullest support and interviewed me many times.

TTG was also helpful in other instances. For example when I was chairman of Sri Lanka Tourism around 2005-2007, we started to promote Chinese tourism, and TTG was at the forefront which helped us alot. That market also developed during that period. TTG had a hand in supporting our initiatives in these two prime markets.

ALLY BHOONEE
Executive director, World Avenues Malaysia
My best memory of TTG was in 2009, during the economic downturn and the Middle East inbound market was badly affected. The precise industry information given by TTG has helped me to sustain my business and gave me the motivation because others inbound players in South-east Asia were in a similar predicament.

There were my promotions through the 18 years, from senior reporter to all the way up to group editor. My first taste of launching a new title, Incentives & Meetings Asia (now TTGmice), in the early 1990s when incentive travel was novel to the region, down to the last new title I launched for the company, TTG Asia Luxury, in 2012.

Each time TTG comes to my mind, it’s always about the 3Fs: family, fun and, of course, food. At editorial, there’s a table just for snacks, including my favourite crunchy and spicy muruku, supplied by creative designer Redmond Sia. There’s always editorial assistant Lina Tan, who would make sure we are properly fed, especially when we do dailies at tradeshows, which is tedious work.

There were the pranks I played on my team each time their birthday came up and we all had a great laugh afterwards. The evenings we networked hard at TTG parties and at various industry functions.