Here is a round up of some amazing facts that you didn't know about cruises. 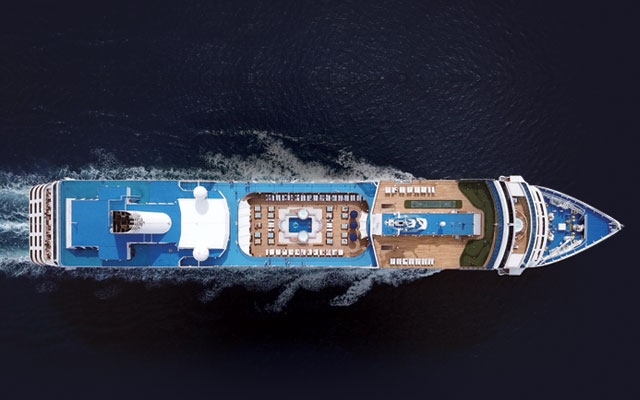 01. 38 cruise brands are active in Asian waters in 2018, deploying a total of 78 ships, with Genting Hong Kong and Royal Caribbean International dominating the market.

03. Naming ceremonies are very important for all cruise lines, as it’s considered bad luck for a ship to enter service without a name.

06. 46 The average age of the Asian cruise passenger

07. Star Cruises, a pioneer in the Asia-Pacific cruise industry, has been in operation since 1993

09. 9.7 per cent of passengers in Asia prefer four- to six-night sailings, while 26 per cent prefer shorter sailings of two to three nights

10. An increasing number of celebrity chefs, such as Jacques Pépin, Jamie Oliver and Curtis Stone are bringing their restaurants aboard cruise ships

11. A lot of ships do not have a deck 13 due to superstition, as sailors believe the number to be associated with bad luck 12. A long-standing tradition for cruise lines, godmothers are influential women who have been chosen to christen a new ship to bring good luck and protection. Famous godmothers include Fan Bingbing (right), the Duchess of Cambridge and Malala Yousafzai

13. The original Titanic, which was 269m long and 52,310 tons, would be barely half the size of most modern ships today

16. In a span of a three-night Royal Caribbean cruise, guests onboard can consume a total of 10,286 slices of pizza

17. The Caribbean/Bahamas is the world’s most popular cruise destination – more than a third of all cruises sail there

18. Genting Dream carries two small deep sea submarines that can each take four people down to a depth of up to 200m

19. Most cruise ships have a multi-national crew hailing from an average of 64 countries on any given voyage

20. 22,394kg of fresh eggs are consumed on an average three-night Royal Caribbean cruise

22. The average cruise ship sails the equivalent of three times around the world each year, covering some 135,196km or (73,000 nautical miles) 24. Guests sailing on the Sapphire Princess will be able to watch the solar eclipse on December 26, 2019, along the Straits of Malacca, a first at sea in Asia

25. Almost all cruise lines have morgues with space for up to three people on board. If someone dies on board, the ship will hold the body until it ports and further arrangements can be made

26. The departure horn of Majestic Princess, a ship launched in 2017 for the Asian market, is a melody of the song from the TV series The Love Boat

27. Norwegian Bliss brings the biggest race track to sea with the latest two-level electric-car race track – a first for any cruise ship

28. P&O Cruises is the world’s oldest cruise line, with its history tracing back to 1837. The line carried its first passengers from Southampton, the UK to Athens, Gibraltar and Malta in 1844

29. Asian cruise passengers predominantly cruise only within Asia on short sailings, with 91% of Asian cruisers sailing within the region

30. Observation pods on Royal Caribbean’s Quantum Class ships rise to 92m above sea level, taller than the height of 11 Merlions

31. Experience flying through the wind with the skydiving simulator onboard selected Royal Caribbean ships. The chamber which is 3.1m wide and 7m high can go up to 257km/hour based on the individual’s weight and skill level

32. Silversea has the world’s most expensive cruise experience. Suites on The World Cruise 2020 aboard the Silver Whisper start from US$62,000 per person

33. Royal Caribbean’s Symphony of the Seas is currently the world’s largest cruise ship at 228,081 tons and sporting 18 decks. She has a total of 2,759 staterooms and a maximum capacity of 6,680 guests

34. Expect a fireworks show at sea when on a five-night-long cruise with Dream Cruises – a first in Asia

37. It’s The Ship is a one-of-a-kind Asian electronic music festival onboard a cruise liner for three days and two nights. Departing from the Singapore shores for the fifth time this year, it will be onboard the Genting Dream where renowned DJs will be spinning at the poolside all day and night

38. The surf simulator FlowRider on board Royal Caribbean’s ships pumps water at a rate of up to 100,000 gallons per minute which is 67 times faster than a fire hydrant

39. Motion sickness will not be a problem on river cruises as vessels do not sail into open oceans with large waves

40. The average length of a river cruise ship is 118m – the length of one football pitch

41. The smaller size of a river ship enables it to dock in locations seagoing vessels cannot reach, offering access to narrow ports and shallow waterways with intimate shore excursions

42. Avalon Waterways is the only company with ships built to sail from Ho Chi Minh City in Vietnam to Phnom Penh in Cambodia, eliminating about seven hours of travel by road

43. Suites onboard Aqua Expeditions vessels have no TV. Instead, there are wall-to-wall floor-to-ceiling windows to allow guests with magnificent views for a fully enjoyable sailing experience

44. With its shallow draft design, Pandaw Expeditions’s Mekong Pandaw is the only ship that can sail up to Stung Treng, Cambodia, to spot the endangered Irrawaddy river dolphins

45. Uniworld is gearing up to launch Mekong Jewel in January 2020, touted to be the most luxurious ship to sail the Mekong