The mystical seabed that surfaces as nature's mirror was until recently one of the best-kept secrets of Kuala Selangor. Today, it delights as a stunning backdrop for Instagram shots, and is a great excuse to learn about the storied past and natural beauty of Bukit Melawati 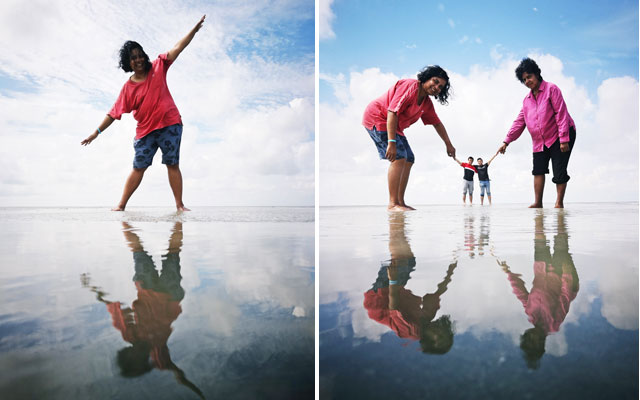 Why
After hearing many stories about Sky Mirror and seeing stunning Instagram pictures shared by friends who had been there, where their reflections on water were as clear as in a mirror, I was determined to create some Instagram worthy moments there myself.

Sky Mirror is all the more an aspirational place to see and experience, given that it surfaces in its full glory only a few times a month. It is a seabed that appears above water only during low tide, exposing an expansive dark coloured sandbar as huge as 50 football fields. It takes about half an hour to walk from one end of the sandbar to another.

The best time to take photographs at Sky Mirror are on the first and 15th days of the lunar month, as well as four days before and after these dates. Outside of these dates, the reflection from the water may not be as clear, and picture quality not at the optimal best.

While in Kuala Selangor to experience Sky Mirror, I also had the option to do an enriching activity. Sky Mirror Tour & Travel offers a one-day do a tour of Bukit Melawati, which has a history dating back to the 16th century, and was the state’s first administrative centre. Bukit Melawati offers panoramic views of the countryside and the sunset.

As the foothill of Bukit Melawati was within walking distance from the jetty, it made sense that I should visit it before heading back to Petaling Jaya, about 1.5 hours away.

The one-day tour includes a delicious seafood lunch and dinner and opportunities to shop for local seafood produce made in Kuala Selangor.

What
Visits to Sky Mirror on the Straits of Melaka were only promoted to tourists from 2H2017 onwards, after its main jetty was launched by the former chief minister of Selangor, Mohamed Azmin Ali.

Prior to this, it was a local haunt known only to the fishing community of Kuala Selangor.

For many locals living in Selangor, Bukit Melawati is a weekend getaway and the main attraction there is feeding the wild, silver-leafed monkeys that roam about freely. I personally feel that the authorities should put an end to this as it promotes over breeding. Our eco-conscious guide pointed this out and discouraged our group from purchasing leafy greens to feed the monkeys with.

Luckily, I had a guide who was a good storyteller, otherwise the significance of over-three-centuries-old artefacts used to fight wartime enemies would have been lost on me. He gave me a glimpse into the macabre past of Bukit Melawati through the numerous cannons, poisoned well, traitors’ grave and the chopping block where enemies were decapitated.

There is also a museum located near the lighthouse, known as Kuala Selangor Historical Museum, which is open free-of-charge to the public. It contains displays of weapons used in the olden days, specimens of old currencies, dioramas and information on the history of the place and its rulers.

However, I found the experience rather dry as it involved a lot of reading. Personally, a short video documentary would have been more effective.

How
My day tour started at the Kuala Selangor jetty, where I was greeted by a guide. He gave a brief introduction about Sky Mirror and Kuala Selangor in general, and mentally prepared us for the 30-minute speed boat ride to Sky Mirror, which he forewarned could get bumpy at points.

The speed boat has a maximum capacity of 12 people, and was full when I visited last Boxing Day. There were easily a few hundred people ahead of us when we reached our destination, but it didn’t feel crowded as the seabed was huge.

We were also captivated by the sight of hermit crabs and sea clams that inhabit Sky Mirror.

The Sky Mirror experience was followed by a seafood lunch at Jeti Seafood Restaurant. Here we had the freshest of seafood, from the fishermen’s catch brought to shore just two hours before our arrival.

After lunch we stopped by some shops selling local produce opposite the restaurant. This was followed by a drive to Sri Shakti Dhevasthanam Temple in Bukit Rotan, a beautiful century-old attraction.

We then drove on to Bukit Melawati, where our guide brought history to life. He also showed us to walking treks known only to locals. Along these routes, we stopped to watch eagles soar against the setting sun and enjoyed beautiful panoramic views of the township below us.

Verdict
Sky Mirror sells itself, but what made the tour worthwhile were the individuals involved – the guide with great storytelling skills, and the excellent photographer who showed us tips and tricks to snap the perfect Instagram shot.

Operator: Sky Mirror Tour & Travel
Price: RM300 (US$74) per person for a group of up to six people, or RM500 for a smaller group of two people; free of charge for children below the age of two.