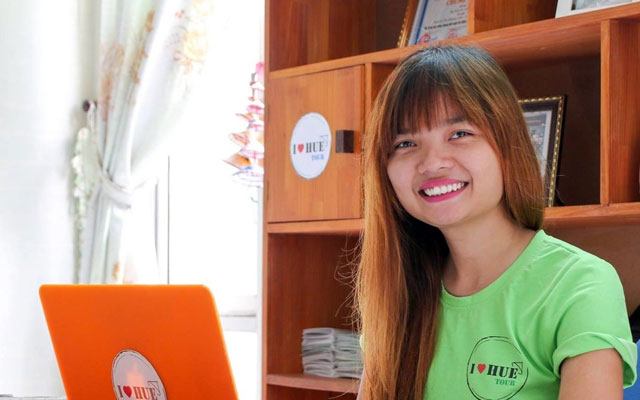 Nguyen Thi Huong Lien was in her third year at university and desperate to find ways to practise her English when she hit upon the idea of offering sightseeing tours to make extra money to fund her studies.

Harbouring a huge passion for her hometown of Hue, Nguyen decided a great way to achieve her aims could be done by offering sightseeing tours to the growing number of foreigners visiting the historic central Vietnamese city.

But she wanted to do things differently. Having taken part in many charity events when she was younger, Nguyen’s top priority was to run tours that benefited the local community, while offering employment and opportunities to other young women like herself.

With just US$100 in her pocket, at the age of 21, Nguyen started trial runs of I Love Hue Tour. The aim was to offer insightful motorbike rides throughout the city and its outskirts, which made stops at local artisans, food stalls and businesses along the way – all operated by women.

That was in late-2014, and in less than five years Nguyen has come a long way. In 2016, I Love Hue Tour had garnered so much interest that Nguyen registered her business as a legal company.

Her social-orientated business model, coupled with her spark and passion for empowering women, led to Nguyen being crowned one of four winners of MIST (Mekong Initiative Startups in Tourism) in 2017, followed by her scooping a Wise Woman Leadership Award for her work.

Her winning pitch for MIST caught the attention of Facebook’s COO Sheryl Sandberg, who asked to meet Nguyen during a visit to Vietnam. Nguyen found herself a mentor in Sandberg, who advised her to think big.

She quickly expanded her operations to Hoi An, Hanoi, Ho Chi Minh City and Danang, launching I Love Vietnam Tour. Said Nguyen: “I was so happy because I was able to connect Vietnam together, and employ so many talented young women to be the country’s ambassadors.”

In 2018, her dreams got even bigger when she decided to expand into South-east Asia, settling on Luang Prabang, where she won the Wise Woman Leadership Award. In August, 15 female students started running tours there, marking the start of a new chapter for the company – I Love Asia Tour.

But the expansion doesn’t stop there. In August 2019, I Love Asia Tour will begin operations in Siem Reap. This will bring the total number of women working for the company to more than 150 female bikers, with 12 female employees based in the Hue head office.

Nguyen, who was short-listed in the social entrepreneur category of last month’s Women of Futures Awards Southeast Asia in Singapore, plans to spend the next five years scaling up business in the three destinations, before setting her sights on her next spot.

She added: “This has been an incredible journey for me in every way, and I couldn’t have achieved it without the support and passion of all the I Love Asia Tour women.”