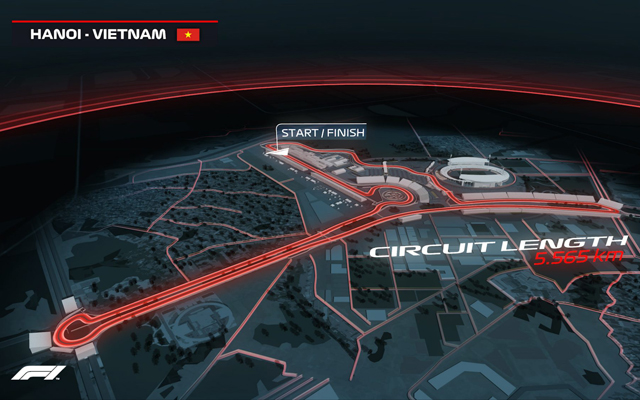 A Grand Prix event will be held in Hanoi from April 2020, the first new race to be announced under Liberty Media’s takeover of Formula 1.

The event forms part of Formula 1’s strategy to broaden the appeal of the sport and to reach new audiences around the globe, while also demonstrating a “firm commitment to Asia”. The event is already established in Singapore, China and Japan.

Hanoi city promoter, Vingroup, secured a multi-year deal to host the Grand Prix, which will begin as a street race using a 5.6km track in the heart of the city.

It will work with Hanoi city authorities and the Formula 1 Motorsport department to bring the event to fruition.

Chase Carey, chairman and chief executive, Formula 1, commented: “Since we became involved in this sport in 2017, we have talked about developing new destination cities to broaden the appeal of Formula 1 and the Vietnamese Grand Prix is a realisation of that ambition.”

Nguyen Duc Chung, chairman, City of Hanoi, said: “(Securing this deal with F1) is a demonstration of Vietnam’s ability to host events on a global scale and attract tourism to the country. It provides an opportunity for inward investment to Vietnam and importantly to bring the exciting wheel to wheel racing of Formula 1 to the people of Vietnam.”

On top of bringing social benefits such as job creation, infrastructure upgrades and potentially more international events being hosted in Vietnam, the event also provides an opportunity to “proclaim the first Vietnamese car manufacturer, VinFast, to millions of audiences around the world”, Nguyen Viet Quang, vice chairman and CEO, Vingroup, shared.