Julian Ryall has a sneak preview of the new Tokyo hotel ahead of its official opening, and finds a delightful property imbued with artisanal details and character of the neighbourhood it stands in. 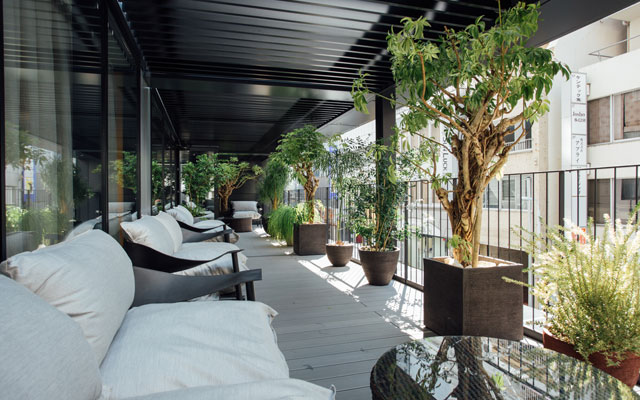 Tokyo’s Ueno district is not known as a hotbed of cool accommodation options, so the opening of the Nohga Hotel on November 1 is timely. And while the district has a reputation for being a bit gritty and industrial, it is also the location of a number of museums, including the Tokyo National Museum, as well as Ueno Zoo and the Shinobazu Pond – one of the city’s top areas for parties during cherry blossom season.

The operators of the hotel are also cleverly playing on Ueno’s industrial back story by forging unique collaborations with local artisans that allow guests to see for themselves hand-crafted products that they would otherwise almost certainly overlook.

These include collaborations with Kimura Glass for a range of high-end glassware that is also to be found throughout the property, beautifully made fountain pens by Kakimori Kuramae and rented bicycles from Tokyobike to tour the neighbourhood.

The hotel’s relationships continue in the kitchen, with local specialists supplying everything from miso and pickles to bonito flakes, kelp, shiitake mushrooms, rice and other ingredients.

Rooms
The property has 130 bright and airy rooms presented in a contemporary Japanese style but with accents provided once again by local businesses, such as the SyuRo amenity boxes and Dear Mayuko soaps and shampoos.

Rooms on the lower floors tend to look out on the workshops, small businesses and apartment blocks that are a feature of Ueno’s backstreets, although the view from the 64m2 suite – complete with a living room and kitchenette – takes in the impressive Tokyo Skytree.

F&B
The Bistro Nohga serves a contemporary French menu designed to reflect the four seasons of Japan and using the freshest and most natural ingredients. The chef prides himself on shopping locally and knowing the provenance of the meals he prepares.

The kitchen is open plan and a quite spectacle for guests seated at its broad wooden counter.

The marinated salmon and cream cheese gravlax entree was excellent, as was the Iwate herb pork rillette, but the salted and caramelised pork belly was outstanding. Make sure you save space for the pear and walnut caramel cobbler or the banana crème brûlée and caramel ice cream.

The hotel has a limited selection of beers, sakes and wines, although they have been selected primarily because they are unusual as well as the work of craft producers.

Facilities
While the neighbourhood’s sights will be the main attraction of any stay, the hotel also has a fitness room and laundry, a library lounge for kicking back and two terraces – one the length of the west side of the first floor of the property and the second at ground level and expertly screened from the road by foliage, including a Japanese maple that will be stunning in the autumn.

Service
An impressive combination of the warmth and attentiveness that is to be expected of a Japanese hotel, but with less of the formality. The staff’s uniforms are hip rather than stiff, along with their attitudes towards guests. It is actually quite refreshing.

Verdict
The Nohga Hotel may be a little ahead of its time in Ueno, but visitors to Tokyo are looking for more than picture-postcard experiences. Increasingly, they want to sample the “real” Japan, and this part of the capital has that in spades. Teaming up with local craftspeople is a stroke a genius and makes the property stand out from the crowd.