This year the World Travel and Tourism Council celebrates 15 years of the Tourism for Tomorrow Awards, championing the change-makers that have inspired the sustainable travel agenda. A total of 186 finalists and 62 winners are living proof that tourism can be a force for good. 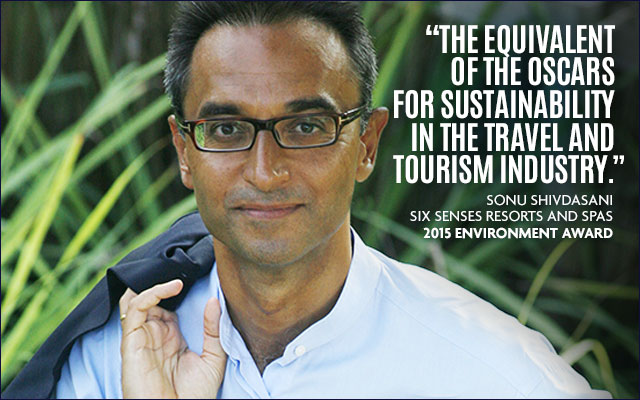 Brought to you by World Travel & Tourism Council Tourists flock to southern Asia for its coral reefs, beaches, wildlife-filled jungles and some of our planet’s most untouched landscapes. It’s unsurprising therefore that hotels have been quick to protect these precious assets, even when higher authorities fail to act. For 15 years, the Tourism for Tomorrow Awards have been celebrating the initiatives that have led this responsibly-minded charge.

Driving to Indonesia’s remote Raja Ampat in 2004, Misool owners Marit and Andrew Miners were horrified to discover an abandoned shark-finning camp that epitomised how much wildlife had been undervalued — overfishing was commonplace and the fragile ecosystem was being eroded. After years of negotiating with local communities and government organisations, the Miners established the Misool Private Marine Reserve, which protects 300,000-acres of ecologically important coral reefs and is funded in part by Misool’s eco-resort, offering exclusive adventure tourism. This continued commitment led to Misool being awarded the Environment Award in 2017.

Jetwing Vil Uyana is another Environment Award winner recognised for putting nature first. Before construction began on a site under Sri Lanka’s UNESCO rock fortress, Sigiriya, Jetwing employed environmental experts to regenerate three habitats: seven acres of wetlands, one of organic and traditionally-harvested paddy fields, and five of land re-forested using native species. Environmentally-sensitive lodges were built into the vegetation, which is now home to 80 species of birds, 17 of mammals and 36 of butterfly.

In 2012, Singapore-based Banyan Tree Hotel Group won the Sustainable Business Award for its commitment to help protect nature and cultural heritage from Mexico to China. Banyan Tree was a pioneer in banning shark’s fin across its menus and paving the way for company-wide sustainability targets. Four years earlier, the Global Tourism Business award was given to Six Senses Resorts & Spas for their systematic ‘Social and Environmental Conscience’ programme and in 2015, Six Senses’ founder Sonu Shivdasani won the Environment Award for The Soneva Group’s unfaltering commitment to reducing carbon emissions. Situated in one of The Maldives’ most remote atolls, Soneva Fushi has addressed infrastructure and supplier challenges through a sustainable filter — imported water was banned in 2008, 79 per cent of waste is recycled through an innovative Waste-to-Wealth initiative, and onsite vegetable gardens produce $48,000 worth of food every year.

Care for the community also plays a pivotal role in the Awards. In 2013, El Nido Resorts’ Ten Knots Development Corporation won the Community Award after 30 years of ensuring that tourism benefits local people, while in 2014 the Lao National Institute of Tourism and Hospitality (LANITH) won the People Award for establishing diplomas, colleges and vocational courses that give young people a brighter future.

Next year’s Awards will be held at the World Travel and Tourism Council’s Global Summit in Seville, Spain, on the 3rd and 4th April 2019. The programme is now open for entries, and organisations can apply and find out more at wttc.org/tourism-for-tomorrow-awards.