Sean Treacy, before leaving the Royal Caribbean Asia-Pacific office for a bigger role as associate vice president strategic planning for international in the Miami headquarters, sat down with Karen Yue for a look back at his three years steering the region's fast-growing cruise market. 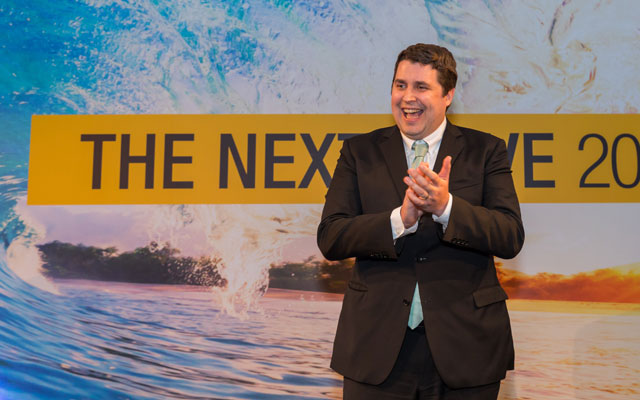 What are your proudest achievements during your time as managing director, Asia-Pacific?
We’ve seen rapid growth throughout the region, which led to increased cruising out of Singapore. When I started in this office three years ago, we had the Mariner of the Seas season that started in mid-October (2015) to end of February (2016), and we were able to extend that in the last season. It was our longest ever season, with 76 sailings from September (2017) to June (2018) on three ships. That really fuelled double-digit growth in Malaysia, Indonesia, Singapore, India, and even smaller markets like Vietnam which were non-existent a couple of years ago. Voyager of the Seas will return in September this year.

We feel that we’ve played a part in changing the game for Asia and for Singapore.

Do you think Asia is also getting the newer, bigger ships because of how demand here has evolved?
It has a lot to do with the travel agent education. That’s the number one reason. Asia is still a very early-stage market for cruises. That’s different in Singapore though, as this is a more mature travel market. But in the other Asian cruise markets, there has been a significant change in the number of travel agents who are familiar with cruises and are now selling cruises.

This is also thanks to trade partners like TTG that are helping to spread the word on cruises, as well as Singapore Tourism Board and Changi Airport Group that are working with us to invest in travel agent awareness and training.

We have a CLIA (Cruise Lines International Association) office here in Singapore which is doing a lot of work to educate travel agents in Singapore. That has made a lot of difference.

A vast majority of our business comes from travel agents and this will continue to be the case for a long time to come. They are the ones who can best explain to the customer the difference between a land and cruise holiday, and how much value a cruise holiday brings, and that cruises are not boring and not just for old people (laughs).

Cruises in Asia once had the reputation of being a floating casino, but that is changing because of the quality of ships that are coming into the region.
Yes, that has completely changed. And again, it is the travel agents who have done a great job in explaining the variety of facilities onboard. On Royal Caribbean ships, we’ve got FlowRiders (surf simulators), DreamWorks Experience, ice-skating rinks, different restaurants, shopping, and more.

Are all these developments in the region what you had expected when you first arrived into Asia?
Oh, it exceeded my expectations! We always knew Asia was the next frontier for cruising, but normally it takes a lot of time to build a brand. We went from a season of 30-odd sailings to more than doubling that in just a few years’ time. Not a lot of markets besides China have seen that kind of growth.

What are your big markets here?
India is the number one cruise market for sailings out of Singapore, while Indonesia is a huge market for us with still a lot of growth potential because of the size of the growing middle-class. We are only scratching the surface.

We are also seeing great growth out of Malaysia although a lot of our sailings out of Singapore go to Malaysia. They really love our product.

Some of the smaller Asian markets are starting to be not so small, like Vietnam and Thailand. We are now looking at growing Myanmar and Cambodia.

For sailings beyond Singapore, Europe is a big destination for us with most demand coming out of Japan and South Korea. We are also seeing good demand for Alaska, and Ovation of the Seas which has gained a strong following in Asia and will be going to Alaska next year.

The Caribbean (sees relatively weaker) Asian demand because it is a long flight from here, but we have some exciting things coming up there which we hope will grow Asian interest. We are launching our Perfect Day Island Collection of private island experiences.

(With the first in the collection, Perfect Day at CocoCay, Bahamas,) we have the tallest water slide in North America as well as the only over-water cabanas in the Bahamas. I think this will resonate with the Asian market.

Is the demand for farther cruises still coming mostly from experienced, repeat cruisers?
Typically. The only rare exception is seen in Europe where people recognise the value of going on a cruise to see multiple destinations in the region. Cruising is much cheaper than coaching and then staying in multiple hotels as a way to explore Europe.

As the number of our guests in Asia grows, we will be seeing more bookings for sailings in the other regions.

What would you have liked to see being accomplished in Asia-Pacific before leaving for your new, bigger role in Miami?
I’d have liked to see more support development although we’ve started on the path and I’m confident I will see more of it. Now that we are getting the newer ships, having more ports that we can go to is ever more important.

We are very excited about our joint venture in Penang (announced in March 2017, Penang Port and Royal Caribbean Cruises will jointly upgrade and improve Swettenham Pier Cruise Terminal in Georgetown to accommodate berthing of larger cruise ships at its facilities). You will hear more details on that soon.

We need a few more projects like that for when we get even bigger ships like those in the Oasis Class or two Quantum Class ships (at the same time) which will happen some day.

Let’s talk more about Royal Caribbean’s role in supporting regional port development. Penang is open to this collaboration so that is able to happen. But how do you get around destinations you wish to call at but are lacking in modern ports to support your new generation ships?
This requires a lot of cooperation. Singapore Tourism Board and Singapore have really played a leadership role (in cruise development). We’ve been very fortunate that ATF 2017 was here in Singapore and what really gave us confidence – and that’s why I’m very confident that things will change very soon for cruising in this region – is that all the ASEAN markets recognised the potential for cruising now.

It takes time and money to build a port but we were able to get all the tourism ministers out to see the Marina Bay Cruise Centre and onto the Mariner of the Seas. They saw the potential tourist numbers cruises could bring to a destination.

There’s a lot of talk (about developing cruise capability) now across the region. Indonesia is developing 10 cruise ports now, for instance.

When I started, it was just Singapore and a little bit of Malaysia and Thailand talking about cruises. Now, it is the whole region.

What else is exciting at Royal Caribbean?
Earlier this year we announced a Sea Beyond initiative where we are investing in new technology such as facial recognition systems which allow customers to just walk through immigration when getting on and off our ships.

For now, this frictionless arrival technology is unique to us, and we are launching it this November at a terminal in Miami for Symphony of the Seas. But with everything else, this will eventually be copied (laughs).

We are also testing a new technology that allows customers to order a drink on their handphone anywhere in the ship and our waiter will know where to find them. (The technology will also let customers) open the door to their cabin and adjust the lighting in their cabin with just one touch. That’s being tested on four ships and we will likely begin to see it in the market next year.

Is the implementation of these high-tech stuff a bait to lure the younger travel market?
Technology is more important to the younger folks but all of us are getting used to technology and the ease it brings. We want all our customers to have an easier time onboard having more fun and spending less time queueing for drinks and services.

Finally, tell me about the new role you’ll be taking up.
I’ll be in charge of international strategy, so I will continue to keep a close eye on Asia, looking at the development of new markets and helping our existing markets be even more profitable.

And because we are having a lot of exciting, new products in the Caribbean, Latin America will be my other main focus. (I’ll be looking at) how we will build our cruise presence in some Latin American markets like Mexico, Brazil, Columbia, Chile and Argentina.

How different or similar will the two regional markets be?
There are some similarities. In both Asia and Latin America we have good trade partnerships but the consumer awareness level is still low. Also similar is that both regions are big on multi-generational family travel.

I’d say that the differences are that in Asia people take shorter holidays while in Latin America they get breaks of a week to 10 days. Also, economically, Asia is probably in a better place.

But the biggest difference is that here in Asia I’ve got a large and established team in Singapore, whereas I’ll have to build a new team over there. I will definitely be using some of the successes we’ve had here and taking the ideas over to Miami for Latin America.