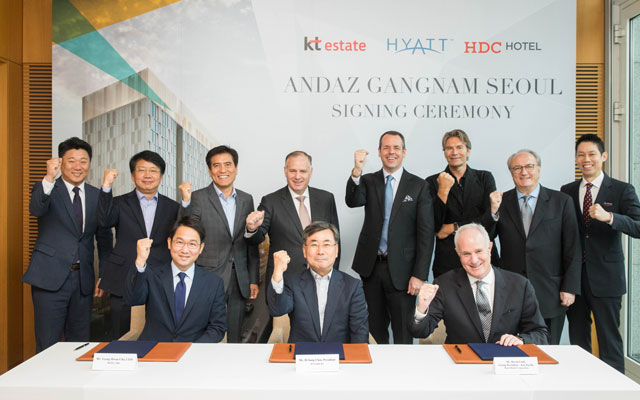 South Korea’s first Andaz-branded hotel is slated to open in Seoul’s Apgujeong neighborhood in Gangnam in 2019.

Andaz Gangnam, Seoul will comprise approximately 241 guestrooms, a lobby lounge (the Atelier), an all-day dining restaurant (the Tavern), 600m2 of meeting space, a pool, and a fitness centre with three spa treatment rooms.

The hotel will rise blocks away from two subway stations and minutes from the Han River, with main restaurant and retail areas like Cheongdam-dong and Rodeo Street – lined with designer brands and high-end shopping – lying within close proximity.

The new-build will join other Andaz properties in Asia, including locations in Shanghai, Singapore and Tokyo.

For the development of Andaz Gangnam, Seoul, a Hyatt affiliate has entered into agreements with kt estate and Hotel HDC – the latter is a returning Hyatt partner in South Korea, with the two previously working together on Park Hyatt Seoul and Park Hyatt Busan.