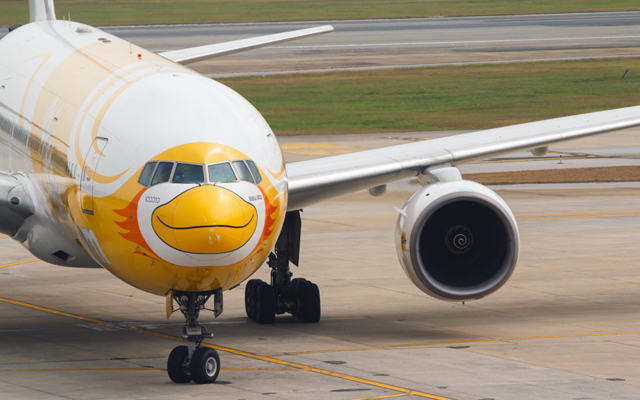 NokScoot’s Japan flights ready for June take-off
NokScoot, the joint venture offspring of Singapore’s Scoot and Thailand’s Nok Air, will begin a daily service between Bangkok and Tokyo from June 1.

NokScoot will operate the Bangkok-Narita services with a Boeing 777-200 wide-bodied, twin-aisle jet. Configured with a total of 415 seats, the 777 offers 24 Business Class seats and 391 Economy seats.

This will be the airline’s first foray into the Japanese market.

Hong Kong Airlines will deploy an Airbus A320 on the new route, which will be outfitted with a single-class configuration and offer 174 seats in Economy Class.

Under the agreement, SIA and SilkAir customers can access Fiji Airways’ non-stop flights between Singapore and Nadi, including the airline’s third weekly seasonal service that was launched on April 4. Customers can also travel on codeshare flights between Nadi and three domestic destinations, including the Fijian capital Suva, Labasa and Savusavu.

In turn, Fiji Airways customers will be able to access SIA and SilkAir- operated flights to destinations in China, Germany, Japan, South Korea, Thailand and the UK.

The inaugural flight from Paris to Taipei arrived at Taoyuan International Airport at 08.15 on April 17.

The route will be flown by Air France thrice weekly.

From October 28, Qantas will be adding a Tuesday A330 service between Sydney and Manila (QF19/20), resulting in a daily flight between both cities.

Between July 5-13 as well as August 3-28, Qantas will operate an Airbus A380 on the QF81/82 Sydney-Singapore service, increasing the number of seats during the peak travel season.

From December 7, Qantas will operate an additional A330 service between Sydney and Osaka (QF33/34), increasing the service, which began in December last year, to four times per week.

And from October 28, the Sydney-Beijing service (QF107/108) will be reduced to five times per week, removing flights on lower demand days of Tuesday and Thursday.