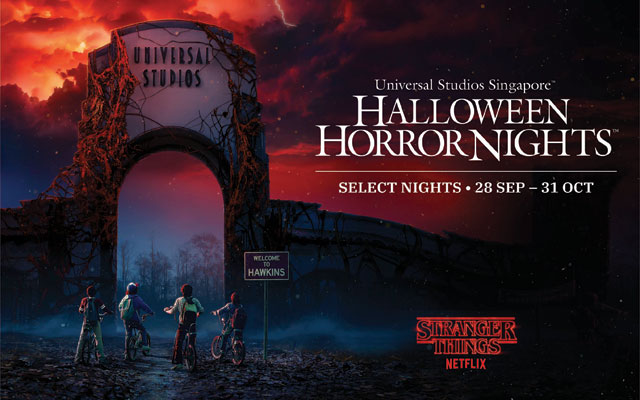 With the help of Netflix, and the creators and executive producer of the blockbuster series – Matt Duffer, Ross Duffer and Shawn Levy – the parks will debut new mazes that transport guests into iconic scenes and story-lines, from the menacing Hawkins National Laboratory to the Byers home with an erratic display of flashing Christmas lights and the eerie Upside Down woods oozing a shower of floating orb-like spores. The chittering, predatory Demogorgon from Upside down will also stalk unwitting guests while they traverse the supernatural world of Stranger Things.

Halloween Horror Nights begins September 14 in Hollywood and Orlando, and September 28 in Singapore.

For the Singapore event, Limited Time Special Admission tickets are available now from S$50 (US$38). Universal Studios is also introducing the Infinite Fear Package which includes admission and Express Plus pass, Zombie Laser Tag, a S$5 meal voucher and S$5 worth of Hollywood China Arcade game credits. All tickets purchased during this limited time period will include Stranger Things merchandise.