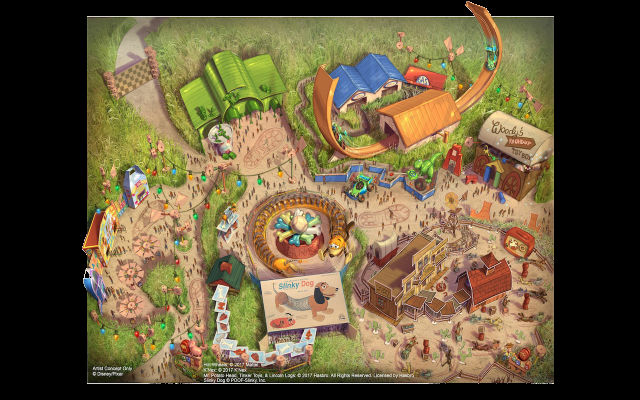 This will be the first time Shanghai Disneyland will be expanded since its opening last year, and the new zone will feature three new rides, a character greeting area, merchandise shop, and cafe.

Based on the Disney·Pixar motion picture series, the concept of the new Toy Story land in Shanghai is centred around giving guests a sense of being shrunk down to the size of toys in the backyard of Andy.

One new attraction is Slinky Dog Spin, where guests take a seat inside Slinky Dog’s springy spirals and race around a wavy roundabout. On Rex’s Racer, guests will be invited to climb into RC Racer with help from Triceratops friend Trixie for a thrill ride on a U-shaped track.

Lastly, Woody’s Round-Up ride conjures a narrative of Sheriff Woody rounding up a herd of ponies, each one pulling a cart. Guests can climb aboard the carts as the ponies swing their carts to and fro in time to the music.

Next to Woody’s Round-Up is the character meet-and-greet area, named Old West, a town made up of a hitching post and façades for various enterprises, such as the sheriff’s office, the saloon and the bank.

The expansion, Shanghai Disney Resort says, is a sign of the early success of the resort, and demonstrates the confidence the joint venture shareholders have in the growing consumer demand for themed entertainment in China.

Meanwhile, Hong Kong Disneyland recently announced it will be ceasing its nightly fireworks display from January 2 next year as it carries out a HK$10.9 billion (US$1.4 billion) expansion project, with no indication if the signature show will resume after the multi-year park upgrade.