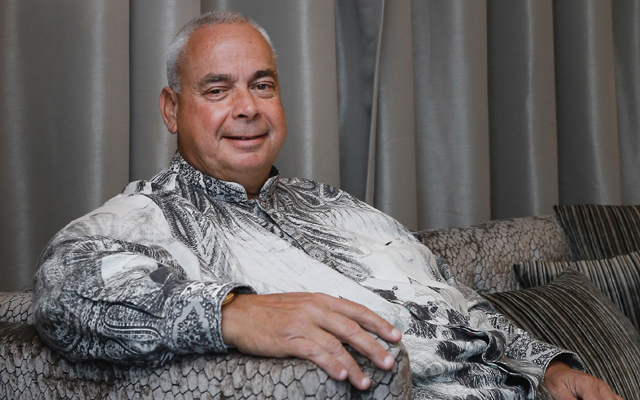 Archipelago was founded in 1997 as Aston International. What was your vision for it then?
Aston, where I worked as executive vice president, was a well-known hotel brand in Hawaii with around 30 properties. The company was looking to expand outside the US. I was looking at Asia-Pacific for countries whose economy would boom in the next 10 to 20 years and I targeted Indonesia and the Philippines originally.

The hotel developments were mostly four and five stars categories, which gave prestige to the conglomerate developers then. My idea then was to get four- and five-star properties in all the capital cities in South-east Asia and in major resorts such as Phuket, Boracay and Bali.

What happened when the economic crisis hit Asia in 1997-1998?
At that time we had opened offices in Jakarta and Manila.

When the economic crisis hit Asia, Indonesia did not only experience an economic crash but a political overturn; however the Philippines seemed more negatively affected than Indonesia.

A number of hotel projects and everything else on the way in the Philippines were all frozen. The only way to get a project in the Philippines was if you also brought to the table US$4-US$5  million as some sort of investment capital to go with getting a management contract.

As a small company, there was no way I had the personal capital to do that. So I had to close the office in the Philippines and came to Indonesia and focused my attention here. Here, at least we had the Aston Rasuna Jakarta and Aston Benoa Bali running.

That, however, was not enough to survive as a management company, especially when the management fee was very modest in the beginning. We did not even have enough income to support an office.

Indonesia’s political situation made the business environment bleak many years after. What kept you believing?
Indonesia’s economy and political unrest were really difficult. I could go back to the US, but if I did that I felt I was going backward. I have a little bit of a donkey attitude to keep battling, and believed that things would eventually succeed.

For almost 10 years the company grew very little. I had a hard time surviving as an individual to keep the company alive. If I had taken my salary in the first six to seven years, the company would have been bankrupt.

During that period, my son Jules, who still lived in Hawaii then, kept asking me year over year, ‘Dad, when are things going to get better for you there?’ I kept responding, ‘Let us see in a couple of years.’

Really inside I always believed that we just needed one of two good breaks. It took 10 years before the company really took off.

Ten years is a long time to keep a business afloat. Where did that positive attitude come from?
The good thing in my life is that I have a humble beginning. I grew up in an orphanage, but was fortunate to get scholarships to high school and Boston college. Then I got a good job and got promoted almost every year. The same thing happened when I went to Hawaii to join a management company. I got promoted to bigger properties, bigger projects.

So my entire adult working life for more than 20 years was successful.

What was the turning point?
It was when John (Flood, now president and CEO of the company) and I discussed what we were going to do to make the company more successful. Then the idea of getting away from four and five stars, to budget and mid-market, came and with it, the idea for the Fave (budget) brand.

We then decided to hire our own architect, design our own hotels and present it to developers.
We developed Fave and included financial projections that showed developers great return on investment. That eventually became the turning point. Today we have 52 Fave hotels opened (plus 22 on projects), and around 25 Neos, a brand a bit higher than Fave.

So of the 134 hotels we have opened now, about 75 of them are Faves and Neos.

We then came up with different brands (from budget to upper upscale) to suit the different needs of investors and guests.

As Aston was only one of the seven brands we were operating, we decided to change the (holding) company’s name to Archipelago International in 2013.

Was the regional and international expansion planned or by chance?
We were able to convince a developer in Langkawi to develop Fave. That same owner wanted to do another hotel in Langkawi, a Neo. (Later) we signed a contract for Royal Kamuela Villas. So we are finally getting higher brand contracts.

Similarly in the Philippines, our partner wanted to build different brands and even created its own five star brand, the Crimson. They are even committed to build more Crimsons.

In the Philippines we have four hotels already; two more will be open this year and at least one every year for the next six or seven years, with the same developer.

How did you get business in Cuba?
It was really an unexpected contact. It was surprising that they picked us when they sent representatives to meet us in Jakarta.

We have signed a project for Aston but are also negotiating for the other brands across the board. As a country the government is really interested to have as many brands there as possible to appeal to consumers.

They want to have more employment for the people. They believe especially with the recent reduction in travel restrictions between America and Cuba that Americans will travel and tourism will boom.

But the brands were developed to suit the Indonesian market. How do you convince overseas developers that the brands fit their clients?
Fave and Neo are mostly domestic products. But the Malaysian domestic market, for example, is similar in many ways to that in Indonesia.

I tell the developers to look at what we have done and how we have done it. I show them the cost structure. How we control and do things here we believe will work in Malaysia as well.

So it is a matter of saying in your country, no matter what country that may be, is the domestic market growing enough? Is there enough budget airline travel, is the economic profile of the country similar to Indonesia? I think in many cases it is. In many countries in South-east Asia, the middle class is growing and travel is up, be it for business, schooling or leisure. So it is a matter of matching the economic profile of the country (with the brand).

What is your plan going forward? More hotels in Indonesia or more overseas expansion?
We have full efforts on both local development and overseas development.

So we have actually put more resources into looking overseas than we have before.

Any thoughts on going public in the future?
We have been approached to sell some shares. In fact, a Chinese company wanted to buy the whole company.

With 134 hotels operating, and over 100 projects on the pipeline, what I would like to see is (my children) Jules (now vice president of technology & integration) and Tenaiya (vice president of sales & marketing) be responsible for the company to grow, so that someday they can take over, run the company and take it to a greater height.

The only way I would actively be thinking about selling anything is if Jules and Tenaiya say, ‘Dad, in five or 10 years we would rather start our own business or do our own things.’

If the family does not want to run the company, then why not sell and take that money and invest in other things. But I really like the idea of the company growing and becoming something more.

Having said that, Gabriella (Brookfield’s other daughter, 13 years old) has talked to me of what college she needs to take to be able to join the company. The fact that she is already thinking about it at her eighth grade is surprising to me.

To sum up, how do you view your “baby” growing in the past 20 years?
If ever I write a story of my life and the whole dream of coming to Asia, it turned out that the first 10 years was worse than what I imagined. The last 10 years, however, was a success story.

With the contracts we signed and the projects and developments on hand, there’s a good chance that in a few years we will manage up to 200 hotels.

When I first came to Asia, managing 20 or 30 hotels would have been a dream.

Sitting here today after 20 years looking at the possibility that we will have 200 hotels, it is hard to believe it is happening.