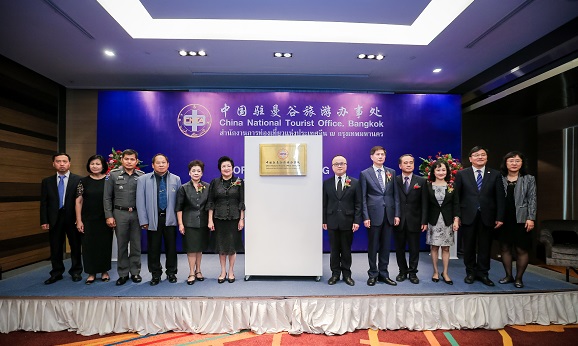 The China National Tourism Administration (CNTA) has opened an office in Bangkok, its second outpost in South-east Asia after Singapore.

A main driver for the decision is the growth potential of Thailand as a source market, Zhang Xinhong, director of China National Tourist Office, Bangkok, told TTG Asia. In 2016, Thai arrivals into China increased to 800,000 from 640,000 in 2015. Zhang expects there will be continued growth now with greater tourism promotion in Thailand from China’s provincial bureaus and CNTA.

“The Bangkok office will promote our bilateral tourism exchange, build up China’s popularity as a destination and serve Chinese tourists in Thailand,” said CNTA vice chairman Wang Xiaofeng at the opening ceremony last month, reiterating that the two countries will continue to deepen tourism cooperation under the Belt and Road Initiative.

In particular, the Bangkok office will network with the local travel trade, media and airlines as well as facilitate cooperation with Thai governmental offices and travel associations, Zhang said.

She added: “Our office is collaborating with travel agent associations to (conduct) workshops on China tourism or fam trips. We shall target travel agents in big cities of Thailand.”

CNTA has 22 overseas offices, two of which are in South-east Asia. It first established a base in the region through its Singapore office to cover Thailand, Myanmar, Laos, Cambodia and Vietnam.