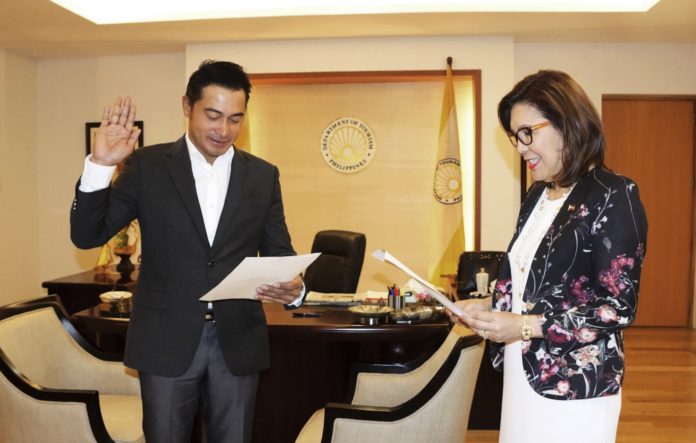 Montano (left) being sworn in by tourism secretary Wanda Teo

Following Cesar Montano’s appointment to COO of the Tourism Promotions Board (TPB), marketing arm of the Philippine Department of Tourism (DoT), the private sector’s initial opposition over his lack of qualifications seems to have quietened to a pensive acceptance.

A familiar face in the local show business, Montano replaced Domingo Ramon Enerio III, who ended his 36-year stint with the DoT and its attached agencies when he went on early retirement last August, one of the casualties of the shakeup under the new administration.

TPB deputy COO, international promotions department, Maricon Ebron, commented: “Cesar comes in with fresh perspectives on how to best promote the Philippines. He is smart and pregnant with ideas. He can do the job.”

Rajah Tours president, Jojo Clemente, said: “I’m not putting down Cesar nor his ideas, but the concern is that he may not have enough experience considering the fact that we’re in a very delicate situation right now as far as our image is concerned.

“The job of the TPB COO entails a lot of aspects. It’s not just about promoting; it also involves administrative, fiscal and other functions, which we are not yet sure if Cesar can bring to the job.”

Nonetheless, Clemente expressed that the trade should be supportive of Montano “to achieve the common goal of promoting the Philippines and bringing in quality tourists”.

GlobalWings Travel and Tours’ general manager Alexander Divinagracia agreed: “Cesar might be a neophyte in the tourism industry but the work in promoting the country is the concerted effort of everybody.”

He believes Montano possesses the enthusiasm to listen and work with other tourism professionals “for the common good”.

“The appointment of anybody is the (Philippine) president’s discretion. I have to respect that,” Divinagracia concluded.