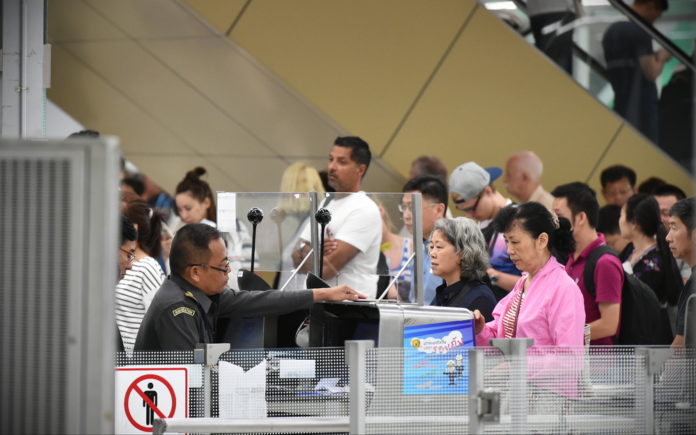 The queue at immigration control at Suvarnabhumi Airport

A sharp drop in Chinese arrivals in October and November has pressured the Thai government to waive the 1,000 baht (US$28) visa fee for single-entry tourists of all nationalities effective November 30, instead of the 19 countries announced earlier last month.

Yuthasak Supasorn, governor of the Tourism Authority of Thailand, told TTG Asia that he is optimistic that this latest visa-fee waiver move will stimulate tourism arrivals upwards by 10 per cent during this high season from December to February.

Apart from recuperating declining Chinese arrivals in Thailand, this would attract more tourists from India and the Middle East, he added.

Inbound players like Adith Chairattananon, president of Golden Discovery Express, saw the move as one that could persuade potential travellers to visit Thailand.

“This is an effective marketing tool for tour agents to promote Thailand in China because a tour package is now cheaper by RMB200 (US$29) with the visa fee waiver. We hope the government will extend the incentive to May 2017 for more effective results,” said Adith.

The measure would make Thailand a more compelling choice for mass markets like China and India as well as last-minute travellers during the festive season, stated Supawan Tanomkieatipume, president of the Thai Hotels Association.

“We don’t want to see tourism hiccups in the peak season due to the decrease in Chinese arrivals over the zero-dollar crackdown,” said Supawan. “Above all, we don’t want to lose our clients to overseas competitors.”