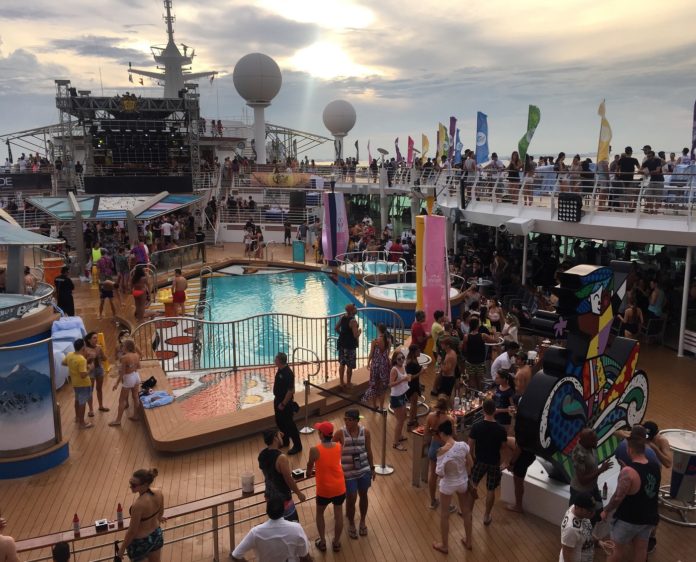 What
It’s the Ship is an Electronic Dance Music (EDM) festival set onboard Royal Caribbean International’s MS Mariner of the Seas. The 4D3N event is Asia’s largest festival at sea and has been hailed one of the main highlights of the EDM calendar since its inception in 2014. In its third iteration, the party cruise departed from Singapore this November, crossed international waters on the straits of Malacca to Penang, before returning to Singapore shores. How
Organised by the Livescape Group, the festival transformed the prestigious cruise liner into a non-stop dance floor. Parties went on from dawn to dusk everywhere on the ship, from the main deck, with its hot tubs and pools, to the bars, clubs and lounges. Themed pop-up parties kicked things up a notch with guests invited to don onesies and lingerie for an extra unforgettable night.

Ex-Baywatch star David Hasselhoff, who was the designated “captain” for this year’s party, hosted a gala dinner and made a special appearance on the deck as he belted out old classics.

The partying continued even as the cruise pulled into Penang for a four hour stopover, as coaches were on standby to transport us to an open air street party with a string of pubs awaiting us. Talk about a party that never ends.

While it is possible for the younger ones to dance to heart-thumping music for four days straight, older ones like myself need time to breathe. Thankfully the 15-deck Mariner of The Seas provided no lack of options. Other entertainment facilities include a casino, rock-climbing wall that overlooks the sea, a basketball court, an ice skating rink, a spa as well as a duty-free shopping promenade. Did I mention that exclusively for this event, their Windjammer Café serves a 24-hour buffet?

Verdict
The festival was a dream for any EDM loving partygoer. While I am personally not a fan of EDM, the top-notch cruise facilities and service gave me plenty else to shout about.