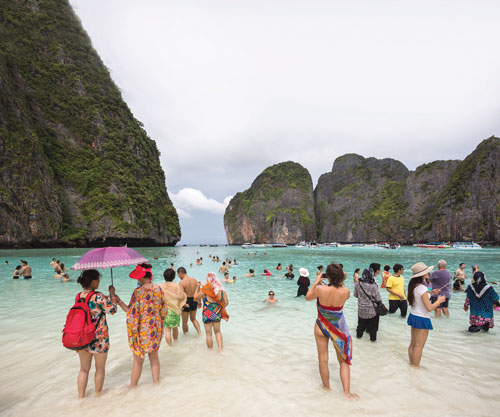 As a crackdown on zero-dollar tours in Thailand dents arrivals from China, some insist this is a worthwhile tradeoff for lasting gains Thailand will miss its 2016 Chinese inbound tourism target because of a crackdown on zero-dollar tour operators, but the trade is embracing the move as a big step towards rebranding Thailand as a quality destination.

As part of a tourism reform under junta rule, prime minister Prayuth Chan-o-cha had ordered tourism authorities to put down mafia-type parties as well as zero-dollar tourism businesses to reposition the destination and let local communities share in tourism-related income.

This order led to the closure of four big nominee tour companies and arrivals from China have since dropped.

In the last week of September, the number of incoming Chinese tourists grew only 2.8 per cent, compared with 35 per cent growth in the first week. The three destinations experiencing the most severe impacts were Bangkok, Pattaya and Phuket, according to the Department of Tourism (DoT).

The DoT forecasted that tourist arrivals from China to Thailand will stand around 9.4 million visitors this year, lower than the previous estimation of more than 10 million visitors.

And according to Ronnarong Cheewinsiriamnuai, president of Thailand-China Tourism Association, the number of Chinese tour groups started declining in September and plunged after China’s peak outbound season during the Golden Week in early October. In Bangkok, numbers fell to around 50 groups per day, down from 300 groups in the past.

Still, local tourism stakeholders are generally voicing support for the clampdown, which Tourism Authority of Thailand (TAT) governor Yuthasak Supasorn said is a step forward in the country’s ambitions to court high-end tourists.

natural resources and national benefits. Many tourism sites have become rotten as they have been overloaded by tourists. Is it worth it?”

Both TAT and ATTA expect that the impact on Chinese arrivals would be relieved by this year-end, although Ronnarong projects that the negative sentiment will drag till December.

There are some encouraging signs though, with the strongest one being support from the China National Tourism Administration (CNTA), which expressly encouraged Thailand to proceed with the crackdown.

Support is also evident in an MoU between the Thai Ministry of Tourism and Sports and CNTA to improve skills of Thai tour guides and develop pricing standards for Chinese tourists.

Meanwhile, TAT revealed that the price of a China-to-Thailand package now exceeds RMB3,000 (US$450), close to the price of a package from China to Japan, which starts at around RMB4,000.

Concerned by the rising prices, Ronnarong said: “If package prices to Thailand are equal to those in Japan, I have no idea how to compete. Japan and South Korea will benefit while Thailand loses.”