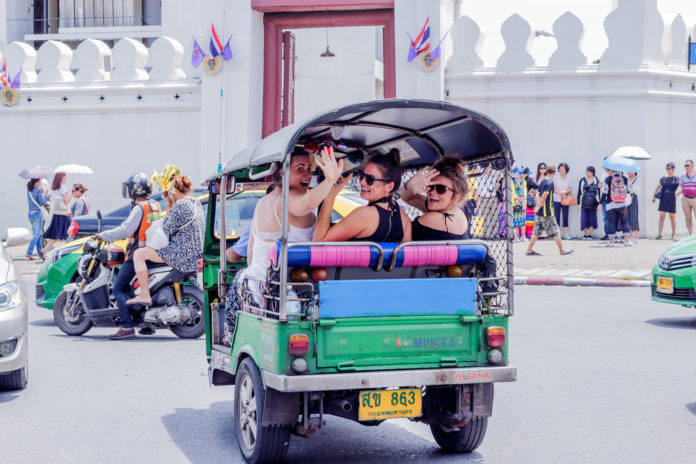 Tourists in a tuk tuk in Bangkok

Thailand’s Ministry of Tourism and Sports expects 2016 tourism income will reach 2.48 trillion baht (US$71 billion), an amount higher than the previous projection of 2.4 trillion baht.

Kobkarn Wattanavrangkul, minister of tourism and sports, said that this is thanks to strong performance in the first nine months of this year.

International markets were a key driver and generated around 1.62 trillion baht with 32.4 million arrivals. Meanwhile, domestic travel generated income of 859 billion baht, an increase of 7 per cent from last year, albeit lower than the projected 8 per cent rise.

In October, Thailand’s tourism started to experience a noticeable downtrend. The zero-dollar tour clampdown has significantly affected the industry that month with Chinese arrivals in Thailand seeing a massive 47 per cent year-on-year plunge to 108,090 visitors.

The passing of King Bhumibol Adulyadej on October 13 was also a drag on tourism. Total international arrivals at Bangkok’s two airports dropped 25 per cent year-on-year to 252,903 visitors in the month.

This is likely to affect arrivals in the last quarter. Still, Kobkarn is confident tourism revenue will increase by 1.28 per cent to 609.6 billion baht in the period, which is Thailand’s high season.