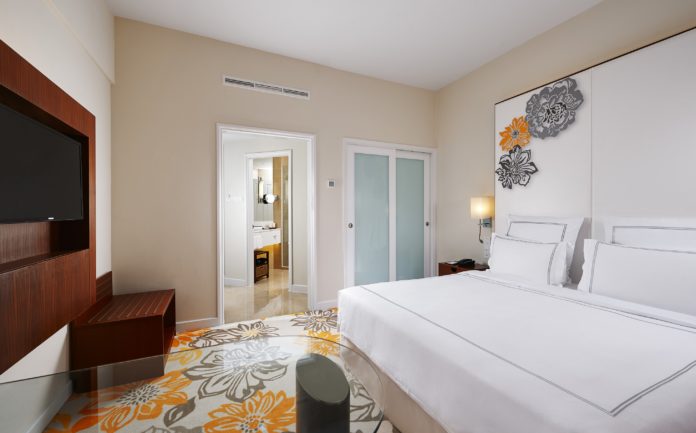 Swissôtel Merchant Court in Singapore has completed an extensive renovation that saw a complete refurbishment of all its 476 rooms and suites, added meeting rooms, transformed F&B venues and a new in-house spa brand.

The revamp took 18 months to complete and was done in phases. In terms of design, all rooms have now taken on a brighter tone while maintaining the hotel’s mixed Swiss-Peranakan features. Similarly, corridors have taken on a lighter hue.

A key difference is the increase in the number of lead-in category rooms while maintaining the same total keys as before, as well as the addition of three new meeting spaces (adding roughly 150m2 of space). This brings the total number of event venues to eight, and includes a renewed 680m2 ballroom.

Peranakan restaurant Ellenborough Market Café, lobby lounge Crossroads Bar and poolside diner Blue Potato have also been revamped, with Ellenborough seeing the most striking change as it takes on a turquoise interior.

When asked what the biggest changes were, Rainer Tenius, general manager of Swissôtel Merchant Court, pointed to the bathroom upgrades.

“The bathrooms are completely new. We’ve replaced the bathtub showers with standing showers, for instance, in most of the rooms,” he said, adding that some bathtub showers remain to better cater to families and Japanese guests.

The last time the property underwent refurbishment was in 2008, revealed Tenius, who also took on the role of general manager at the hotel in that same year.