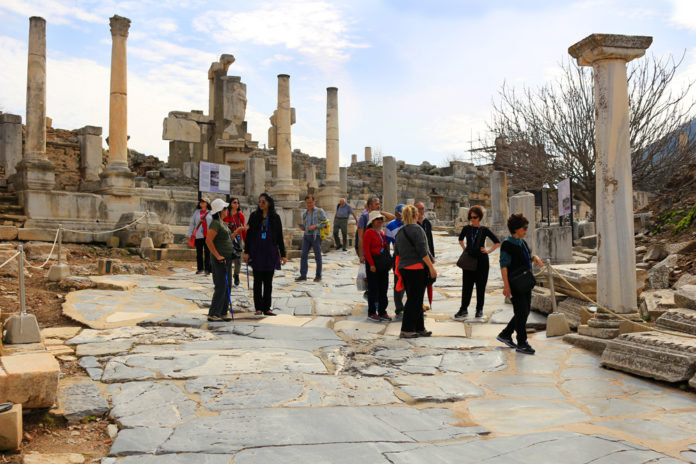 Tourists walk down the marble walkway in Ephesus, Turkey

The travel trade from Turkey are at ITB Asia 2016 to reassure buyers here that the destination is safe and trouble-free for tourists despite several terrorist attacks this year, a failed coup attempt and the ongoing ISIS conflict.

Kaan Yilmaz, culture and tourism counsellor at the Turkish Embassy, tourism & information office, described Turkey as the “safest country in that part of the region” and “trouble free”.

He said the government, through the Ministry of Culture and Tourism, has also been organising familiarisation trips for the travel trade to reassure the market that the destination is safe.

Tourist arrivals into Turkey had declined sharply this year. From January to August, there was a 38 per cent drop to 3.2 million visitors, down from 5.1 million compared to the corresponding period last year.

Inbound agencies are suffering as a result of low arrivals. Mukaddes Mehmetemin, sales and marketing director at Inter Travel Services, described business as being very bad.

For the first four months of 2016, the company lost around 80 per cent of its business from Asia and made the tough decision to stop selling packages in May until the situation improves, which she expects could only be in 2017.

Another inbound player, Mehmed Dogan, president of Arar Tours, believes Turkey’s main problem was dealing with the general perception that the destination was not safe, and believed that the government should do more to change this perception by working with international media companies.

On its part, the company was working with hotels to come out with attractive tour package rates which are generally 30 per cent lower than in 2015. Despite the company’s efforts to increase business, the company’s core markets from Latin America and Asia saw a drop of around 30 to 40 per cent this year, said Mehmed.

Rahul Sharma from Exotic Holidays based in Auckland, which is also the GSA in New Zealand for Fez Travel, a large inbound tour operator and wholesaler based in Turkey, said demand for Turkey remained low partly due to a travel advisory from the New Zealand government which had been in force for many months already.

He said: “We’re trying to stir demand through early bird promotions for tour packages in 2017 but there are very few takers. In 2014, we had 700 clients going to Turkey. This year, the numbers have dropped to not more than 70. Forward bookings for next year is less than 20.”

California-based World Travellers’ Club president, Kaushik Sen, said demand for Turkey used to be mainly for its cultural tours in the south of Turkey bordering Syria, but now his clients are avoiding the destination altogether and were instead opting for Greece and Georgia.