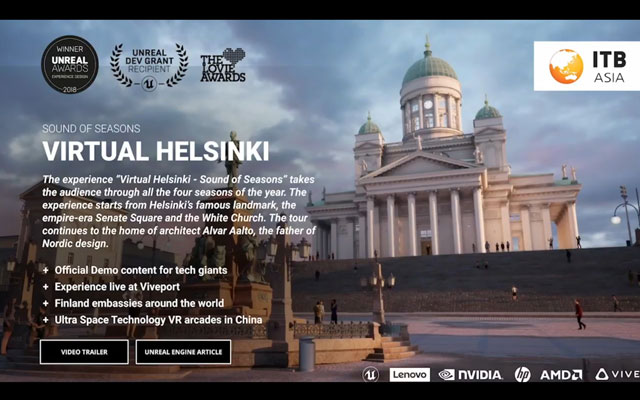 Virtual reality has been hailed as a saviour for the travel and tourism industry during this time of pandemic, allowing destinations to continue engaging with travellers through a suite of immersive online content to whet their wanderlust appetite in anticipation of the travel rebound.

With the ability to bridge the gap between the online and offline world, “the future of social media and travel is in the virtual space where you can meet regardless of where you are in real-life,” said Laura Olin, COO and partner at Zoan, a Finland-based VR studio.

“Today’s teenagers are spending more time (on video games) like Mind Trap or Fortnite on social media. That is the future where we are (headed) to,” she added.

Speaking at the ITB Asia 2020 Virtual session, titled How Virtual Reality is Changing the Way We Experience Travel, Olin expressed: “You are not tied to any real-life restrictions, but you can explore anything: the history, the fantasy and the future. These are the same principles we are thinking about (in) the future of travel and travel marketing.”

She said that destination marketers in the city of Helsinki started embracing the medium in 2018, working together with Zoan to conduct virtual reality tours around Helsinki, showcasing its urban nature and attractions for tourists and conference delegates.

“(The idea) was very much on par with the sustainability goal that Helsinki as a city has because they don’t want to attract every single tourist from around the world to come, but they want to offer Helsinki in different formats to people who are interested in the city,” she said.

This year, the city of Helsinki partnered with Zoan to create the Virtual Helsinki, a digital twin of the Helsinki city centre built using 3D modelling, alongside a virtual concert broadcasted throughout Finland which saw 700,000 attendees and 10 million avatar interactions.

“What we are now working with Helsinki on is a ‘Metaverse’ 3D space that lets people explore Helsinki in different ways. For instance, this summer, we have made Helsinki Design Week and Amos Rex Museum exhibition available online for people to enjoy,” she said, adding that the next project will be the Helsinki Biennale next year.

“So this is really something that Helsinki has been putting a lot of focus on and they are seen as a forerunner throughout the world,” she added.

Destination marketers can tap on virtual content to reach wider audiences. Olin said: “(Suppliers are engaging with) not only those people who can afford to come to the place, but also those who may only have a computer and internet connection.”

During the 15-minute session, Olin also highlighted the commercial aspect of video games, saying: “You can actually make money in those spaces. They are free for anyone, but if you want to get the full experience, you need to swipe your credit card every now and then.”

In like manner, tourism businesses can capitalise on the rising digital uptake for profit. Olin said that Zoan is currently working with the city of Helsinki to discuss plans on how to monetise virtual travel experiences.

“Of course, the idea with destination marketing is for people to come and spend their money, but what if you have this virtual space and have some of the services available there? With micro-payments, people from around the world could (make purchases) without even visiting the city,” she said, adding that discussions around that idea are ongoing, with plans to “hopefully” launch pilot projects “soon”.