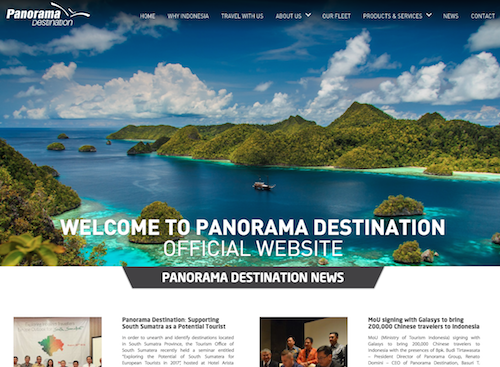 PANORAMA Destination, the inbound arm of Indonesia-based Panorama Group, is taking on a global market strategy to expand beyond its traditional Europe core.

Budi Tirtawisata, group CEO of Panorama Group, said the company needs to “gain momentum to drive (more) inbound business”, especially as the Indonesian government has embarked on aggressive international marketing efforts to meet its ambitious target of 20 million arrivals by 2019.

Renato Domini, CEO of Panorama Destination, said: “Europe has been our strongest market, with the majority (of business) coming from France and The Netherlands.

“We definitely need to diversify and expand our (customer base) and need people on the ground to help us (penetrate into) the markets,” he added.

To realise this, Panorama Destination this year created a new business development director role in charge of central and south Asia and the Middle East at its Jakarta head office.

Panorama Destination has also appointed representatives in Vietnam, China, India, the Middle East, the US and Australia, which are deemed potential growth markets for the DMC.

India, for example, contributed five per cent of total business to the company and Domini seeks to grow the market to at least 10 per cent with new representatives appointed in Delhi and Mumbai.

The company, which already has a market in Canada, wants to expand into the US too.

“There is a growing number of airlines flying between the US and Asia and Garuda Indonesia plans to open services there too, so we see opportunities there,” Domini explained.

“Panorama used to have a programme called Shocking Offers, which were popular with the European and Canadian markets,” he said.

“We are launching similar programmes with some adjustments in India.”

These itineraries are shorter, spanning three to five nights, compared with seven to 12 nights’ programmes sold to Panorama’s European customers.

In China, Panorama is targeting the end users and FITs, rolling out experiential programmes such as cooking classes and farming activities to entice a new generation of Chinese travellers.

“We work closely with the Ministry of Tourism, supporting fam trips and sponsoring film making in Bali,” added Domini.

Domini further stated the company will soon launch its Agent Portal, with products and packages available for its international business partners.