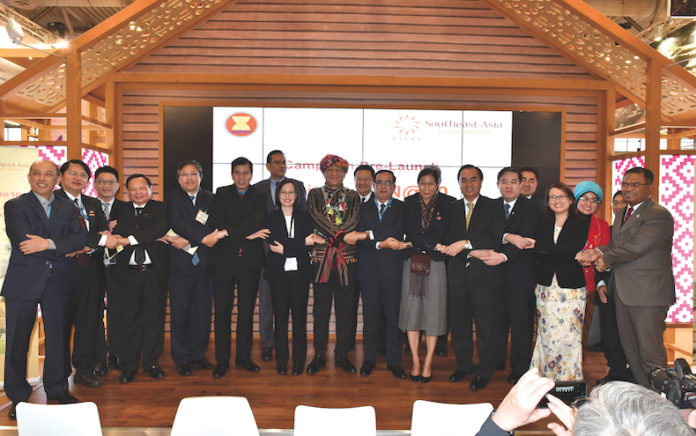 AS ASEAN gears up to commemorate its 50th anniversary in 2017, top tourism officials have come together to lay the groundwork for a new campaign and build up the momentum to promote the region as a single tourism destination.

The Visit ASEAN@50: Golden Celebration campaign will highlight the region’s top 50 festivals and 50 travel experiences, in addition to launching special themed offers and travel promotions on the website.

Speaking to TTG Asia at the official pre-launch of the campaign at ITB Berlin, Malaysia’s minister of tourism and culture, Mohamed Nazri Abdul Aziz, said the campaign would be a formal endorsement of tour operators’ on-going efforts in selling multi-country packages.

“In the past, each operator has been (marketing these packages) on his own, and now he will get support from ASEAN. It will not be done haphazardly, it will be done properly with the support of ASEAN,” he said.

Packages will be devised based on themes; a consolidated heritage tour, for instance, will leverage UNESCO World Heritage sites in ASEAN.

Thailand, on its part, has already initiated efforts in promoting dual-country packages under its ASEAN Connect project since last year, according to Thai minister of tourism and sports Kobkarn Wattanavrangkul.

However, improving connectivity will be a core aim for ASEAN in its quest to roll out “realistic packages”, admits Kobkarn.

She added: “We have improved land connectivity to neighbouring countries, enabling the roll-out of packages such as Trat by road to Sihanoukville and onward to Siem Reap, or Trat-Sihanoukville-Phu Quoc.”

Singapore Tourism Board director of trade engagement & market access, international group, Soo Siew Keong, agreed: “The main driver of this (campaign) is to work with the trade to see what is appealing to the travellers and involve them.

“We want to bring in airlines from longhaul markets into the ASEAN countries. We also have an interest in cruise and hotel chains too. They can all come together to form an attractive package,” he added.

“For instance, visitors can fly into South-east Asia by Singapore Airlines, then fly around the region on AirAsia and stay in a hotel chain across the ASEAN countries and this can all fit into a package. The trade forms a very important role to allow this campaign to roll,” he said.

However, the absence of a single visa for the region continues to be a bugbear for visitors, especially for those hailing outside of South-east Asia.

Mohamed Nazri believes the campaign will “motivate” member countries to ease their visa requirements if they see the success of its neighbours in attracting higher visitor numbers owing to liberal visa policies.

During the campaign pre-launch yesterday, So Mara, secretary of state at the Ministry of Tourism Cambodia said the campaign aimed for 121 million visitor arrivals to ASEAN by 2017, an increase in tourism receipts to US$83 billion and a longer average length of stay of six-seven days and to more than two ASEAN countries.